LEWISTON, Minn. — When isn’t farming naked a good idea? A new Land Stewardship Project (LSP) billboard campaign promoting the power of building healthy soil on southern Minnesota farms answers that question and more. The billboards, which made their debut this month near the Minnesota communities of Austin, Spring Valley, Fountain, Preston, Dexter, Grand Meadow and Minnesota City, utilize striking photos, inspiring quotes, and, in the case of one revealing sign, a little bawdy humor, to get across the benefits of utilizing cover cropping, managed rotational grazing, no-till and diverse rotations to build resilient, biologically healthy soil.

Shona Snater, who directs LSP’s soil health program, said the campaign was inspired by the eight farmers who sit on the group’s Soil Builders’ Network steering committee. The Soil Builders’ Network is made up of over 800 farmers and others located across southern Minnesota, as well as in northeastern Iowa and southwestern Wisconsin. Members of the Network regularly come together via field days, workshops, pasture walks and Zoom calls to discuss various ways of building soil profitably.

This farmer-to-farmer networking, combined with other efforts on the part of government agencies and nonprofits, has led to an increase in the number of acres in the region that are managed utilizing methods such as cover cropping. During one recent five-year period, cover cropped acreage in Minnesota increased almost 42% to 579,147 acres, according to the U.S. Census of Agriculture. According to a Minnesota Department of Agriculture 2020 report, the majority of southeastern Minnesota counties in the heart of LSP’s Soil Builders’ Network are showing cover crop adoption on over 10% of the farms.

“This increase in the use of soil healthy practices didn’t happen by accident,” said Snater. “There’s no doubt that farmers are inspired by and learn best from other farmers when it comes to innovative practices like cover cropping and rotational grazing.” She added that despite the impressive increase in the use of soil building practices, in total only around 3% of Minnesota’s farm ground is cover cropped on a regular basis. “We have a lot more room to grow when it comes to acres that would benefit from these practices. As the 2022 growing season approaches, we’re hoping these billboards will spark more connections between farmers seeking to build soil profitably.”

In one case, a billboard posted near Austin and Minnesota City could spawn a little laughter as well. The sign, which was posted in collaboration with Practical Farmers of Iowa, features a farmer’s bare legs and the phrase, “Don’t Farm Naked: Plant Cover Crops.”

“Part of the message we’re trying to get across is that building healthy soil is not only good for the land and a farmer’s bottom line, but is a fun way to take control and build resiliency when it comes to raising crops and livestock,” said Snater.

For more information on building soil health profitably and to view images of the billboards, see landstewardshipproject.org/soil-health. 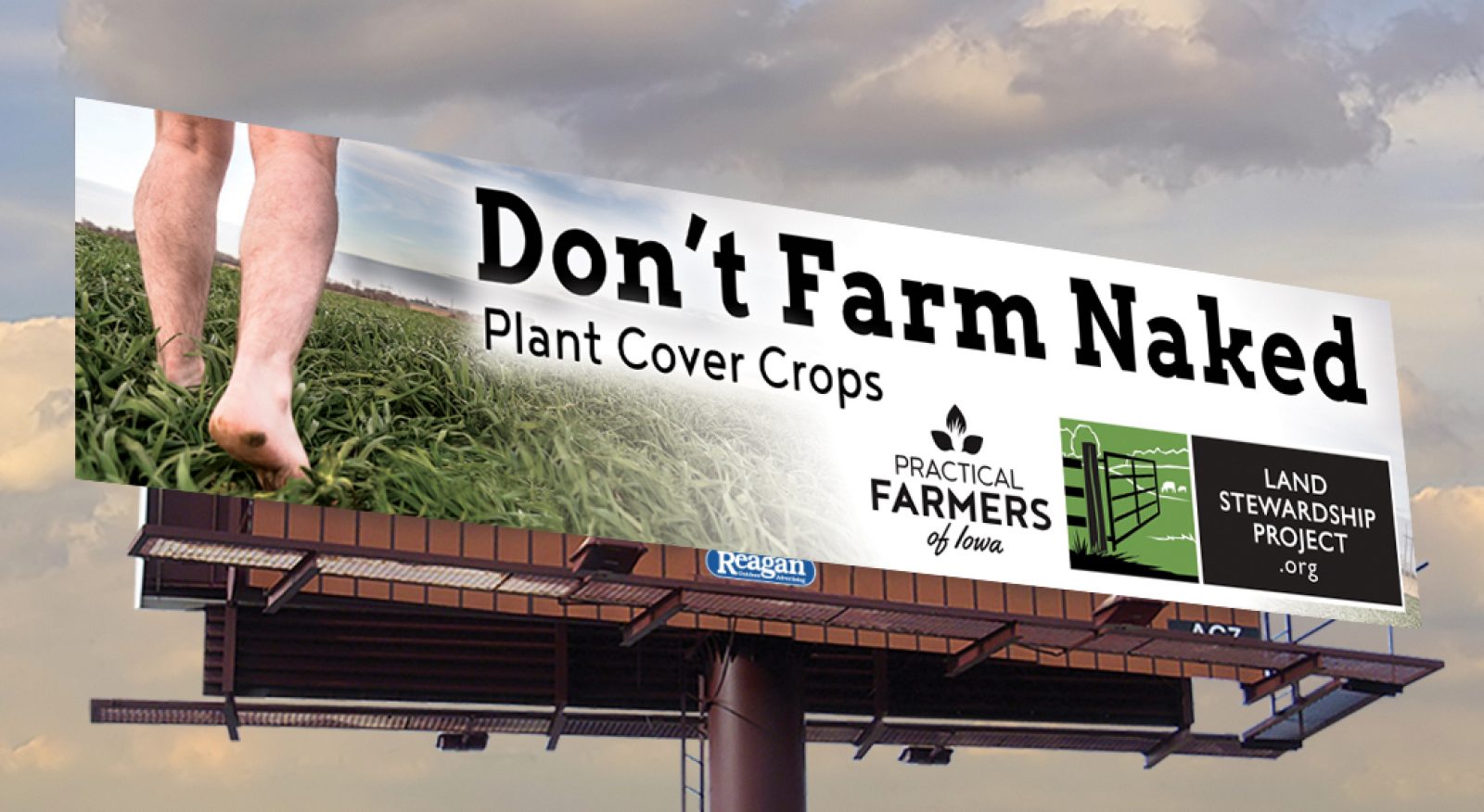 One of the “soil health” billboards is located near Austin, Minn.