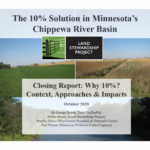 The Chippewa 10% Project was launched in 2010 and wrapped up in 2018. During the fall of 2020, LSP’s George Boody wrote a report summarizing the Project’s context and approaches, as well as what short term and long terms impacts it’s had. Download the report, The 10% Solution in Minnesota’s Chippewa River Basin, here.

The Multiple Benefits of Agriculture: An Economic and Social Analysis 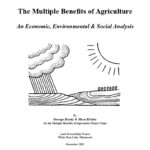 The Multiple Benefits of Agriculture: An Economic and Social Analysis is a special report on the “Multiple Benefits of Agriculture” analysis, which was conducted over a three-year period in southeastern Minnesota’s Wells Creek watershed, and a sub-watershed of the Chippewa River, in western Minnesota. Biologists, economists, and rural sociologists from the U.S. Geological Survey, University of Minnesota, Minnesota State University-Mankato, Bemidji State University and Iowa State University conducted the study. The Land Stewardship Project coordinated the research; the Minnesota Department of Natural Resources, Minnesota Institute for Sustainable Agriculture, and the Institute for Agriculture and Trade Policy also participated in the analysis.

Four scenarios were examined in the watersheds, ranging from continuing current trends of fewer farms raising increasing acres of row crops, to converting a significant number of acres to grass and forage-based farming and utilizing other perennial systems such as wetlands. Under this last scenario, sediment levels in the waters of Wells Creek and the Chippewa River dropped 84% and 49% respectively. Nitrogen in the water, which can be a major pollution problem, plummeted by 74% in Wells Creek and 62% in the Chippewa under that scenario. These environmental benefits occurred even as the number of dairy cattle was increased from 5,427 to 12,212 in Wells Creek, and 271 to 911 in the Chippewa sub-watershed study areas, under the scenarios.

The Multiple Benefits of Agriculture: An Economic and Social Analysis report is available here.

Building the Bridge to Soil Health 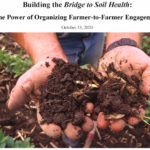 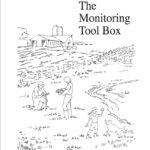 In 1993, LSP convened a group of farmers, researchers, and natural resource professionals to create the “Biological, Financial and Social Monitoring Project.” This initiative, which developed a set of indicators for determining the ecological, economic, and social sustainability of farms, went on to have a tremendous influence on various aspects of the regenerative agriculture movement. Everything from state and federal policy to beginning farmer training to innovative watershed management and scientific research has been impacted by this project.

One result of this project was the Monitoring Tool Box, a resource developed for farmers and natural resource professionals to monitor the sustainability of various land use practices. To download a copy of the Tool Box, click here.

Join LSP as we launch our first of many Monthly Virtual Policy Organizing Meetings! On the fourth Tuesday of each month at 7:00 p.m. we will gather to learn about what is happening at the state, local, and federal level; take collective action together; dive into an issue campaign of your choice; and break out into regional groups to build relationships with other LSPers in your area. For more information or to register, see https://secure.everyaction.com/Kcxzxu1pB0mYNb5LFrXvbA2.