The sustainable agriculture community lost a true friend this week when Bud Markhart passed away after a courageous battle with cancer. I had the opportunity to interview Markhart last fall for an LSP podcast. He was a professor of horticultural science at the U of M, and so it’s no surprise that he made his mark in the area of sustainable ag academics and research. But what impressed me most was Professor Markhart’s influence on the next generation of farmers, researchers, activists and just plain old citizens. It sounds hopelessly sentimental, but it’s true: influencing the next generation means you will live forever.

A decade ago, the University of Minnesota’s College of Food, Agricultural and Natural 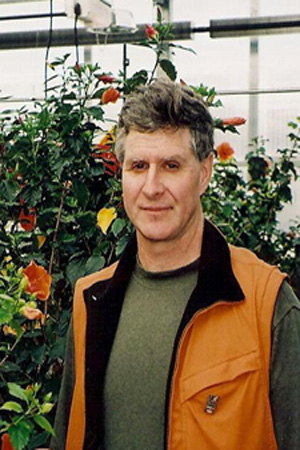 Resource Sciences was reporting that virtually none of its graduates were seeking careers as farmers. That trend seems to be changing, thanks in part to people like Bud Markhart. Just this spring I ran into yet another pair of farmers, Anna Racer and Peter Skold, who had begun their journey into production agriculture thanks in large part to Bud.

Perhaps what’s so remarkable about the influence Bud had in sustainable ag is that he was trained as a biochemist and plant physiologist, and spent his early academic career doing basic research. However, during the 1990′s he turned his attention to researching and teaching about organic farming systems. During the past decade or so he did cutting-edge research on cold-resistant tomatoes, was instrumental in launching a student-run organic farm at the U of M, developed and taught courses on organic agriculture and the role it plays in society, and wrote the “Sustainable Gardener” column for Northern Gardener Magazine.

Recently, he had been very involved in developing an organic agriculture major at the University and regularly gave a talk called, “Can Organic Ag Save the World?” What impressed me about Bud was that he saw the U of M not only as a place that should produce sustainable ag-savvy farmers, researchers and teachers, but also as an institution that provided a thorough understanding of this type of food production for the graduates who would seek careers far from the land. After all, engineers, attorneys, investment brokers, CEOs, librarians, nurses, politicians and civil servants have the ability to influence policies that can either support, or stymie, a more sustainable food and farming system.

To provide an insight into just how passionate and thoughtful Bud was about this issue, I’ve excerpted some of our conversation from last fall here:

“I realized through conversations with people like LSP’s Dana Jackson that organics is not just substituting one input for another—it was really a new way of looking at a farm. It was not just the organic solution to this conventional chemical. And part of that goes back to a quote I came across related to when the word ‘organic’ was first used in the literature to describe agriculture—it described the farm as essentially an organism where all parts have to work together, and that to me is a really useful model in viewing what a healthy farm system is like.”

“I now teach a course called, ‘Organic Food: How to Grow it. Where to buy it. Can it feed the world?’ I teach it on the Minneapolis campus with the goal of attracting students that are outside of horticulture and outside of the traditional Saint Paul campus. I get students from all over the University and from different majors, and that’s really an exciting classroom experience. I think we’ve had a lot of students that are coming to the class because of interest in either social justice, or economic justice, or the cultural sociology aspects of food systems.”

“Cornercopia Farm started in 2004 with a few students who were concerned that we didn’t have any place on campus to grow food. So they went to MISA, the Minnesota Institute for Sustainable Agriculture, and asked if there were a way that MISA could arrange some land to start growing food. It started with just a few students under the leadership of Courtney Tchida. It has slowly grown from a couple hundred square feet to now three acres of land. And we have a class that’s part of our organic curriculum that’s called the ‘Student Organic Farm: Planning, Growing and Marketing’ class. That’s a spring class where the students meet and we start figuring out how to apply these organic principles they’ve learned in other courses to a specific site, in this case the student farm. What I hope happens with the student farm is it becomes more integrated into the learning experiences of the campus. I’d really like to see the college embrace it as a college program.”

“The new generation of professors need to be open minded enough to learn from the farmers, because there are some really creative, terrific problem-solvers out there. I just hope the University looks at them as a resource as much as possible. We need to look not only at the organic production systems farmers are using, but the cultural differences. I’m on the board of directors of the Minnesota Food Association, which has an Immigrant Farmer program, and I’ve worked closely with Dream of Wild Health [the Native American farm program], so I have a lot of experience with our diverse immigrant farming population. These new immigrants have so much knowledge to bring to agriculture with their varieties and techniques that you know we can learn from them as much as we can teach them. And we also need to learn from the diverse populations in our cities and our rural communities and see them as resources, not just problems to be solved. The University has had this approach oftentimes where we’ll go into a community, identify the problem and say, ‘Here’s the solution,’ rather than working with the community to learn from them and look at them as a source of knowledge.”

“It’s been one of the biggest transformations in our student population I’ve seen since I’ve been here. We went through a period when I first came here where we had an active vegetable production faculty. When those faculty members retired or left the University, they were not replaced. So there was a real decrease in the food production part of our faculty and an increased emphasis on the landscaping industry. Now it’s come back the other way. Over half of our students in horticulture now express an interest in organic farming and local foods in general, one way or another. That’s as majors. And then we have a plethora of students who want to do a minor in this area.”

“What are the policies that get in the way of local food production on urban lots? What do we do for soil remediation in places where there’s been contamination? How much local food do we want? Those are cultural, governmental kinds of questions that are critical for us to start answering. The people who are going to be developing and answering those questions are the students now that are coming through this program and are studying at the Humphrey School of Public Affairs and the Carlson School of Management at the U. Hopefully they’ll be the ones influencing the Metropolitan Council to think more than just about sewer systems and high density housing, but thinking about the land for food production and where we’re going to preserve it. We’ve made conscious decisions on the government level to support bike paths and open space and parks. I’m hoping we get to the point where the government plays a role in securing land for a healthy food system. I’m not convinced the marketplace is going to be able to do that, just like the marketplace wouldn’t build bike paths and the marketplace wouldn’t preserve parks.”

“One of the things we’re in the middle of developing right now is a new major for the college with the working title of, ‘Organic Food Systems: Local to Global.’ To me, that offers a tremendously exciting possibility to offer a lot of experiential learning so from the word go students are out in the community, on the farm, working on the student farm, getting their hands dirty, not only in the soil but in all aspects of the food system.”

Can organic ag save the world?

“What I want to do in that talk is look beyond just the food production benefits of organic production, because we focus so much on that. What I want to look at are other aspects of a production system and its benefits to the world. And so what I look at is fossil fuel use, soil health and carbon sequestration on organic farms. Choose your environmental concern, and look at how organic production systems can help. And the last one that I emphasize in this talk, because I think it’s really important, is the social justice aspects of our food system in terms of the farmer. It breaks my heart to hear the stories of increased Parkinson’s disease, decreased sperm counts, decreased fertility in women in rural parts of our country, diseases related to the farming practices used. Is our production system inhumane for the farmers and farm families, the children of the farmers who are suffering because of the way we vote with our food dollar?”

Organic ag as a public good

“Hopefully there will be an awareness that research and teaching in this area is a public good worth supporting. If we were to look at how many billions of dollars have been invested in the land grant research that’s gone into developing our industrial agricultural model — let’s just take a fraction of a percent of that and invest it in organic research. Organic 15-20 years from now is not going to be the same as it is now. It’s going to take new science, new understanding, new research, new knowledge in order to make these systems more profitable. And I use that term profitable not just in terms of yield, but in that big picture of sustainable. It’s not something where we flip the switch and we go from one to the other, but we’ve got the opportunity to make those changes over time, and I’m hoping that our students are going to be part of making those changes.”

Bud, I’m pretty sure they will.

The Markhart Organics Endowment Fund is being established at the University of Minnesota to support student experiential learning in organic and sustainable food systems working on the Student Organic Farm or students working with horticultural crops that are engaged with traditionally under served neighborhoods in the Minneapolis/St. Paul metropolitan area. E-mail bmarkhart1@comcast.net to share stories or for more information.