Amy Haben and Tom Moore ride a golf cart over a rickety wooden bridge spanning Otter Creek and follow a path to a lush pasture where a couple dozen head of Scottish Highland cattle graze, their shaggy coats luminescent in the late afternoon sun of a June day.

“Before they grazed the edge of the woods, it looked like what’s next to the house,” Haben says, glancing back at a thick mix of buckthorn and other invasive species of brush.

These cattle represent more than a way to clean up some messy back corners on this former dairy farm near the small community of Silver Lake in west-central Minnesota. They are keys to one family’s transition from mere owners of 100 acres to active operators of an enterprise they hope will not only keep them on the land, but help them connect others to its pastures and woods. 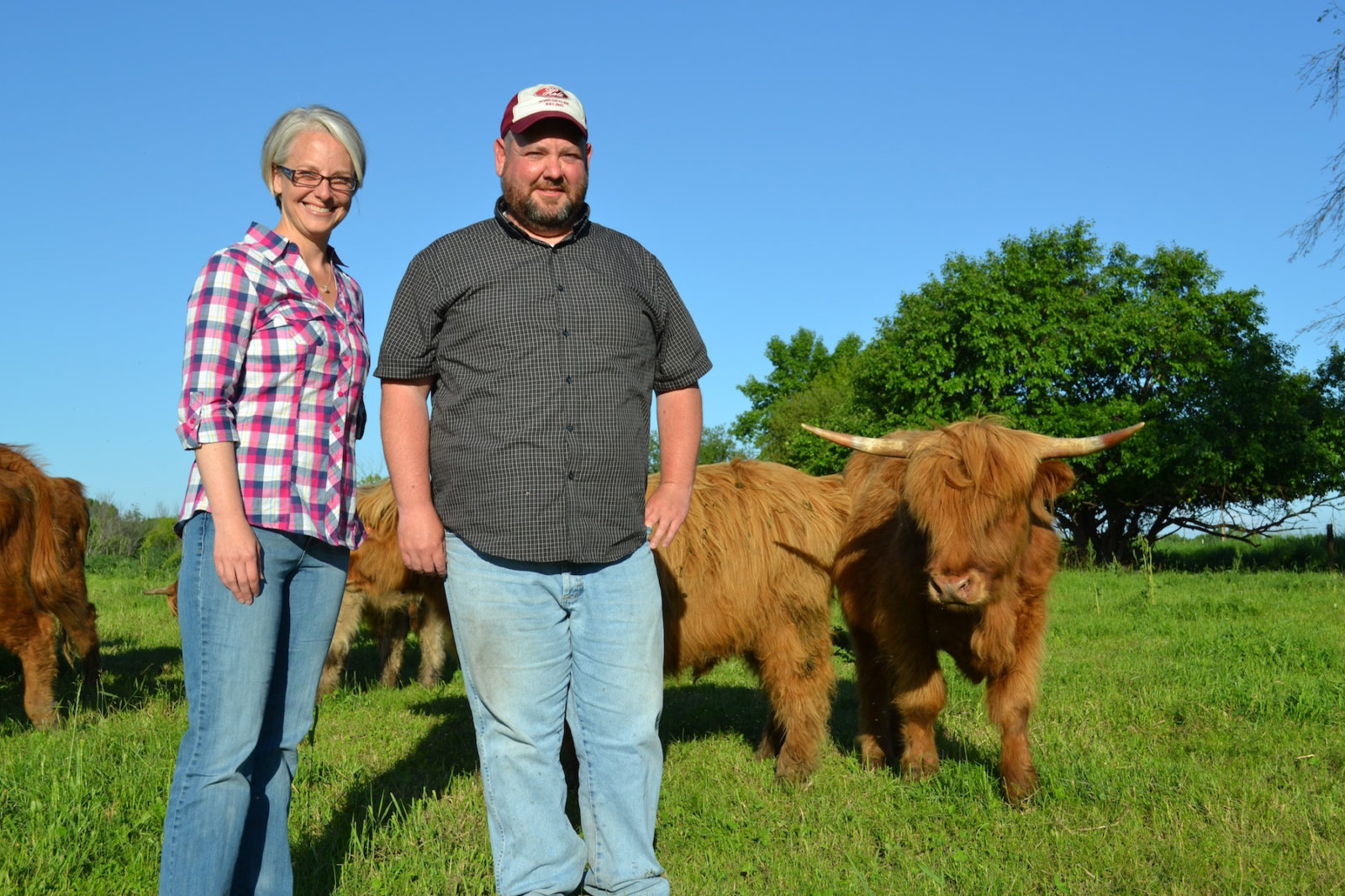 “We were so focused on finding a way to buy the farm and keep it in the family that we didn’t really think about it as a business,” says Haben, 45, of their mind-set when she and Moore, who is her brother, purchased the land in 1995. “But then we realized there’s a lot of responsibility and to really make this work long-term we had to be thoughtful and deliberate about the choices we were making as they related to the farm. We started in on this process of determining what does it mean to farm and what does it mean to steward this?”

As part of that process, they enrolled in the Land Stewardship Project’s Farm Beginnings course, and during the winter of 2010-2011, traveled twice a month to Saint Joseph, Minn., to participate in sessions on business planning, goal-setting and marketing. The Farm Beginnings course, which LSP has been offering since 1997, has become a national model for providing potential farmers with training. Farm Beginnings is also known for its use of established farmers and other agricultural professionals as class instructors. While the classes were led by farming veterans, Haben and Moore said they felt comfortable asking questions about the basics of turning a hobby into a full-grown business.

Putting the Farm to Work
What the brother-sister team learned was that there was a way to combine their passion for land that has been in their family since 1876 with economic viability. Timber, a stream, pastures and wildlife habitat make up the scenic parcel, which they named Butternut Woods Farm after butternut trees that have long stood on the property. After Moore and Haben, along with Haben’s husband John, purchased the farm from their grandmother, they realized they wanted to take a more active role in managing the farm (no one had lived on the former dairy farm for almost 20 years).

One avenue for making it a working farm was the Scottish Highland cattle, which had started out as a hobby—two brood cows and calves—and a way to clear brush on a few acres that weren’t accessible with field equipment. With their shaggy coats, thick hides and efficient way of grazing grass and browsing woody vegetation, these cattle are known for their ability to do well in Minnesota’s harsh climate while producing a lean meat sought after by consumers.

Through the Farm Beginnings class, Haben and Moore were exposed to farmers who talked about how grass-based livestock production could be a way to derive income off of a farm, given the growing demand for meat that’s healthy and comes from animals that are being treated well. Haben and Moore also sat in on business planning sessions where they learned how to create long-range strategies for building an economically viable operation.

“It really got us thinking about the numbers behind it,” Moore says, adding that he’s gotten to the point where he now sees the cattle as just as much a part of the farm as the birds and other wildlife.

Expanding the Network
Networking with other beginning and established farmers through Farm Beginnings was key, say Haben and Moore. And the value of getting input from others has stuck with them after graduation: in 2012 they expanded their network to include other farmers through their participation in the Journeyperson Course. Journeyperson was developed by LSP to fill the continuing educational gap between farm start-up and farm establishment. The course provides hands-on mentoring, technical assistance and training for beginning farmers with one to six years of farming experience who want to further develop their skills.

Haben and Moore are now working with an established grazier, Richard Handeen of Moonstone Farm in Montevideo, Minn., as well as two other recent Farm Beginnings graduates. They visit each other’s farms and share information and insights. They are also using the Journeyperson matched savings program to set aside money for the farm’s growth.

“We liked the idea of Journeyperson because it was going to be a bunch of people who were actively farming and fairly new at it,” says Moore. “And even though they’re not your neighbors, they’re your farm neighbors. Some of them may be 50 to 100 miles from us, but they’re working through the same start-up challenges we are and are a phone call or e-mail away, which is great.”

Plans for Growing
Having such a network is going to become more important than ever as Haben and Moore look to grow Butternut Woods Farm’s beef production in upcoming years.

“Now that we have some real life experience under our belt, what is the best way for us to grow?” Haben asks. Any future plans need to reflect that neither Moore nor Haben are full-time farmers.

Moore works in sales for a fireplace business in the area. Haben, a former business consultant in the healthcare industry, lives with her family in the Twin Cities. They now have 23 brood cows and recently started some low-key direct marketing of beef to family and friends. This year they will sell four cattle; their short-term goal is to expand their production capability each year. Haben says they envision a day not too far off when their enterprise will be direct-marketing 15 head a year.

Producing that many animals for sale presents its own challenges, but marketing all of them is a whole new ballgame.

“At the scale we’re at, our customers have found us,” says Haben. “As we produce more beef, we need to make sure we have the market for it by growing our customer base.”
They are also working with a Farm Business Management Instructor at Ridgewater College. Haben and Moore meet with the instructor about once a month to improve the data they have available about their farming enterprise so they can make better informed financial, production and marketing choices as they move ahead.

As they check out their pastures on a recent summer evening, the brother and sister are happy with what they see. The shaggy beasts seem to be thriving on pastures that were once a combination of cropland and wooded acres overgrown with weeds and brush. After a lot of planning, seeding and grazing, they are seeing the quality of the pastures improve each year.

“Everything seemed to be a battle for awhile,” says Moore. “You’re battling to get grass to grow, battling brush, battling mud.”

A Shared Vision
One other “battle” can also be figuring out family dynamics, especially one with an extra wrinkle: Moore lives on the farm fulltime with his wife Lori, and Haben and her family, along with their mother, Sue, are only on it during weekends. So communication and planning are key.

Through Farm Beginnings and Journeyperson, Haben and Moore learned the importance of creating a common vision for the operation. As a result, they undertook a family discussion about the future of Butternut Woods involving their mother and Haben’s two children, Jack, 15, and Will 12. Working together on an overall vision has helped them avoid the major misunderstandings that can trip up extended family-based systems.

“If you have a big picture view you share, it helps you get over those day-to-day irritations,” says Moore.

That big picture includes not only a farm that earns its own way, but does it in a way that ensures the operation is environmentally sustainable for the next generation.

“I think in many ways Farm Beginnings was the place where we first articulated that vision, which is we think what we have here is special and there’s an opportunity to share that and build our family and community around this,” says Haben.

There are signs that others are starting to appreciate what Butternut Woods Farm has to offer beyond just good beef. Haben recalls how one of their customers visited the farm and later when asked how she liked the beef she had bought, actually hesitated a bit before answering.

“She said, ‘I honestly didn’t realize it was going to taste that good, but what I cannot separate is, is it that good or is it that good because being on your farm makes me appreciate and think about the source of my food differently?’ ”

In episode 138 of LSP’s Ear to the Ground podcast, Amy Haben and Tom Moore talk about how Farm Beginnings and Journeyperson have helped them make their family’s land into a working farm.

Our current food system has decimated rural communities and confined the choices of urban consumers. Even while America continues to ramp up farm production to astounding levels, net farm income is now lower than at the onset of the Great Depression, and one out of every eight Americans faces hunger.

But a healthier and more equitable food system is possible. Come hear how grassroots food and farming leaders across the U.S. are tackling these challenges by building community food webs that strive for health, wealth, capacity, and connection.

Description: Rachelle Meyer of Wholesome Family Farms, will share specific and actionable tips for building your ideal customer and figuring out which marketing strategies work for them by using technology to track customer activity and communicate effectively. Rachelle combines tried and true marketing principles with firsthand experience as a farmer/direct-marketer to help you refine your marketing approach, avoid needless pitfalls and focus on what’s working well for your business and customer. Registration for this event here.