A few years ago, Brad and Shelley Schrandt faced a dilemma: should they keep their dairy herd at around 20 cows for a few more years while working off the farm, or should they expand enough to justify quitting those town jobs? They went for the expansion in an attempt to simplify their life. Shelley, who was pregnant at the time, was helping milk cows on a neighboring farm while working at a bank, and Brad was a night mechanic for a waste management firm.

“Those were some long days,” Shelley says, rolling her eyes. “Yeah, those were the days,” Brad quips.

While saying this, the young couple (he’s 34, she’s 30) is sitting in the kitchen of their farm near the southeast Minnesota community of St. Charles. They explain that while expanding met taking on a heavier debt load, working off the farm was hurting them as well as their operation.

“We knew there were things on this farm that just weren’t getting done,” says Shelley.

So in 2007 they added 15 cows to their herd, providing enough milk income to quit their jobs. In 2008, they added another 25. It turns out their gamble may have been ill-timed. 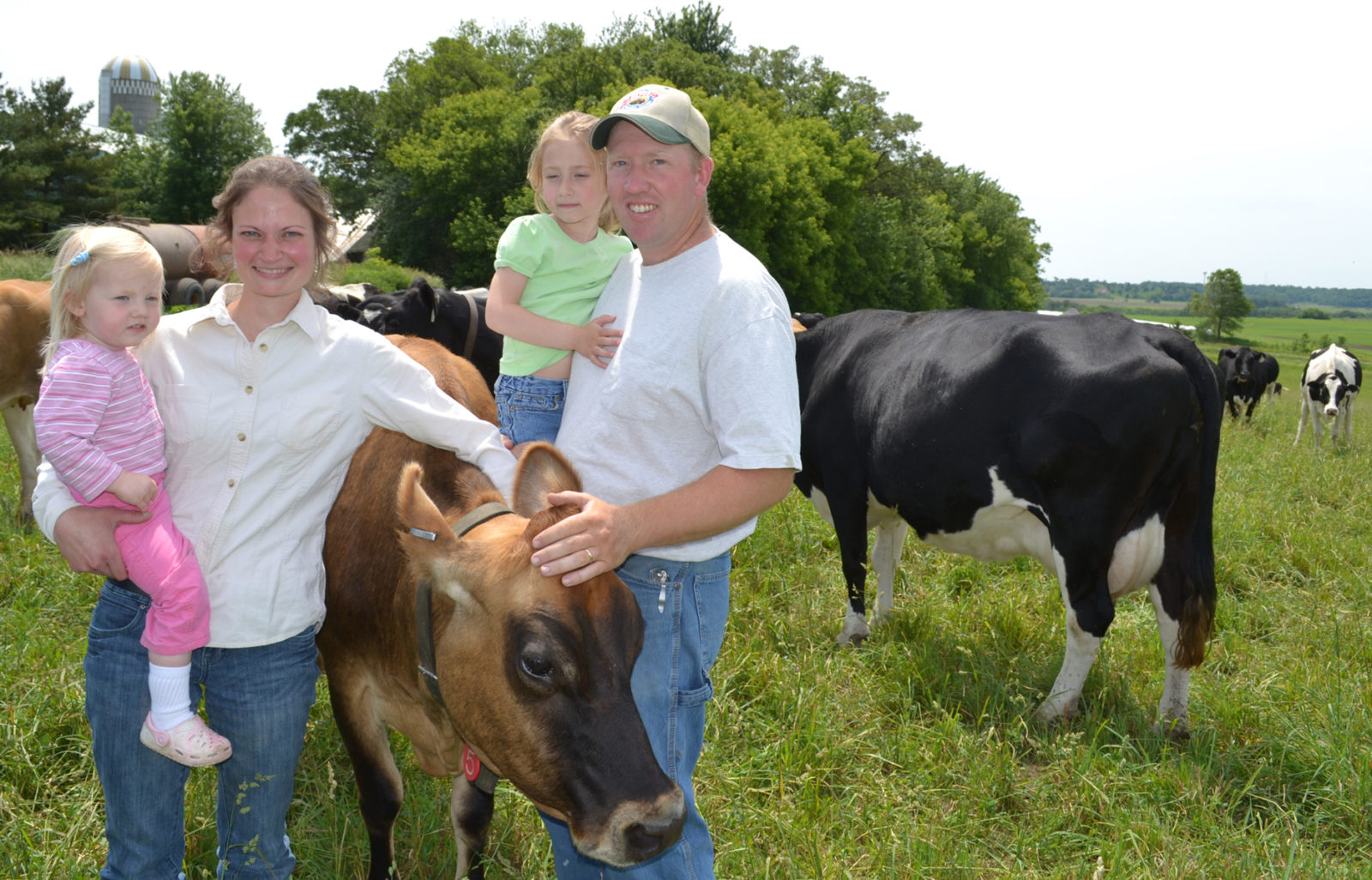 Shelley and Bad Schrandt, with their children, Grace and Callie.

“We went for broke, and almost went broke,” says Brad, only half joking.

Yes, it’s been a rocky couple of years for the Schrandts financially. In fact, when reflecting on those tough times, the farm couple sounds a little relieved they are still in business. They say what made it easier to ride the rough waves without going under was the business planning background and farmer networking they gained when they took the Land Stewardship Project’s Farm Beginnings course in 2005-2006.

That fall and winter the couple drove twice a month to the Minnesota community of New Prague for sessions taught by established farmers and other agricultural professionals from the community. For 14 years, Farm Beginnings has been training beginning farmers who are interested in innovative management systems.

“We felt like Farm Beginnings was a good training course for anyone who’s trying to start a business of any kind, not just farming, because of the emphasis on business plans and whole farm planning,” says Brad. “A lot of it is trying to lay out where your goals are and how you are going to get there. The risks in agriculture are so much higher now.”

Economic Turndown
They know from first-person experience about those risks. While 2008 turned out to be a good year for milk prices, 2009 was not. Add on top of that in 2007 they began the three-year process of transitioning the herd to organic. Once a herd is officially organic, it can qualify for significant price premiums. But before that day comes, there can be financial risk involved. For one thing, the Schrandts were converting row crop acres to rotationally grazed pastures. This met foregoing the subsidy payments commodity crops like corn and soybeans qualify for.

“While converting this high value land to grazing you don’t have that income from the crops and the debt accrues,” says Brad.

Things got bad enough that they seriously began reconsidering farming as a career. “We talked about, ‘Do we just quit?’ ” Shelley recalls. “I remember we had a lot of discussions about whether we were even going to survive.”

And finally becoming certified organic in August 2010 didn’t solve their problems. It turns out the down economy was scaring organic dairy processors from taking on new contracts. That meant selling organic milk into the depressed conventional market.

But their tenacity paid off. In October of that year, the Schrandts got an organic contract with Westby Creamery in Wisconsin.

“Maybe we should have grown more slowly,” says Shelley as she heads to the barn to help an artificial insemination technician. “But it all worked out.”

Support Network
The other invaluable resource LSP and Farm Beginnings provided was a connection to established farmers in the area. Carmene and Dale Pangrac, long-time organic dairy farmers from the area with years of experience in managed rotational grazing, have traded labor, equipment, and, most importantly, knowledge, with the Schrandts.

“That’s been huge for us,” Brad says. “They’ve been a big help in figuring out animal treatments and crop production, even just what you do when money’s tight. What are your highest priorities? What do you buy? What do you not buy? What can you do without?”

In fact, the Schrandts are in a bit of a hotspot for innovative farming in general. They regularly visit the farms of other beginning farmers in the area who are trying out different production and management methods. Their original loan came from a local banker who has other graziers as clients.

No Farming Neophytes
That the Schrandts would need mentoring, or that they would take a beginning farmer training course in the first place, may seem somewhat surprising, given their backgrounds. Shelley grew up milking cows in the same barn they milk in now, and Brad grew up on a dairy farm in northeast Iowa. In fact, they met while Brad was working on a large dairy near St. Charles.

But when the couple got married in 2003 and began looking into taking on farming as a career, they soon figured out they didn’t want to farm conventionally. Both their families got out of dairying partly because of the difficulty of making it with a moderate-sized herd utilizing conventional methods.

So the Schrandts began investigating producing milk using managed rotational grazing and eventually going organic. The Farm Beginnings classes, as well as the on-farm workshops the program offered, helped them learn the basics of grazing.

As of this summer, the milk from the Schrandts’ 70-cow herd has been on the organic truck for over nine months. They farm around 230 tillable acres. The couple owns approximately 100 acres and rents the rest from Shelley’s parents across the road, where the cows are milked in a tie-stall barn. Since the barn had not been milked in for five years before 2006, it needed some work, including a new plumbing system. Plans call for building a low-cost parlor that gets the cows through more efficiently with less labor. The Schrandts are hoping that spending less time milking will mean more quality time spent with their two chatty daughters, Grace, 4, and Callie, 2.

Reducing Risk
The Schrandts raise most of their own feed, including 80 to 90 acres of rotationally grazed pasture. Brad and Shelley feel they are making progress in working down their debt load, thanks to the premium their organic milk receives and low cost production methods such as managed grazing.

They’ve supplemented their Farm Beginnings training by enrolling in the Minnesota Farm Business Management Program, which is helping them monitor and manage their cash flow, among other things.

“Even if milk prices dropped some, I think we’re still headed in the right direction for paying down debt,” says Brad. Despite the early bumps, he has no regrets about converting the operation, and the land, to organics. For one thing, his experience working on large-scale confinement dairies was not a pleasant one—the cows were pushed hard to produce high volumes and it affected the animals as well as the farmers.

The young farmer also feels a grass-based organic system will prove to be more financially viable long-term, especially in a world where volatile commodity prices are making agriculture increasingly risky.

While he, Shelley, Grace and Callie check on cows grazing in a pasture that was converted from corn a few years ago, Brad points to cropland across the road that’s renting for $400 an acre.

“I don’t know how you make it on that,” he says, shaking his head in wonder.

In LSP Ear to the Ground episode 104, Brad and Shelley Schrandt talk about how business planning has allowed them to manage risk.