Every budding farm enterprise goes through that certain stage at least once—the one where setbacks outnumber successes, careful planning gets bushwhacked by forces beyond one’s control and the learning curve can resemble a roller coaster headed in one direction: up. It’s at that period in an enterprise’s life that minimal risk is a farm’s best friend—it can mean the difference between missteps becoming debilitating or just a minor trip-up on the road to eventual success.

Mike Reil calls it the “experimental/making mistakes” stage and he and his wife Linda are in the depths of it as they launch a livestock operation on the west side of Big Stone Lake, a mile-wide expanse of water that sits between Minnesota and South Dakota. 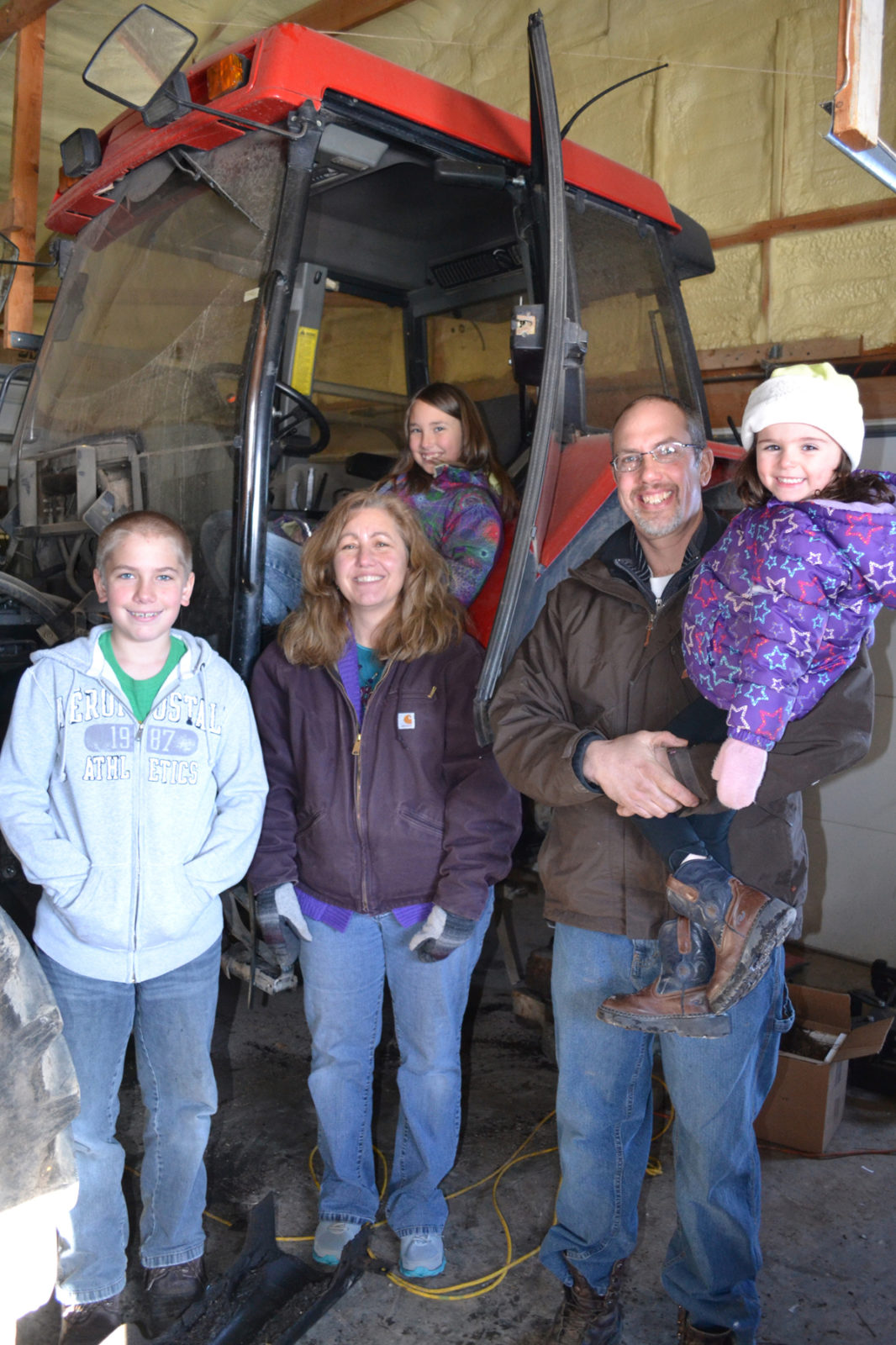 “Things do go wrong and it’s good to figure out those things on a smaller scale so it isn’t so costly,” says Mike as he and Linda and three of their five children hang out in the warm kitchen of their farm home on a bitterly cold January day. “The goal is to keep the risk small enough that the mistakes don’t cause huge problems.”

So far, mission accomplished. After graduating from the Land Stewardship Project’s Farm Beginnings course in 2013, the Reils have made their first serious foray into farming. The results were mixed at best, but they are starting the 2014 growing season with the confidence that they’ve learned a lot about what it takes to get to the next stage.

A Return Home
While working in Minnesota’s Twin Cities for 15 years—Mike in machine shops and Linda in the mortgage business—the Reils always suspected they’d eventually come back to his family’s 320-acre home farm near Wilmot, in eastern South Dakota.

“It was always relaxing to come out here for the weekend,” says Linda. “We always thought we’d retire here.”

And why not? After all, the farm is in a picturesque spot within sight of Big Stone Lake, which serves as the source of the Minnesota River before it makes the 330-mile trip to the Mississippi.

But Mike and Linda ended up making the move long before their golden years. When Mike’s mother passed away, the Reils moved into a rented house in Wilmot in 2008 to be closer to his father, Loren. Mike, who is trained as a diesel mechanic and has an associate’s degree in engineering, got a job in nearby Watertown. The plan was to eventually farm the land, but at the time that was still far into the future for the couple, who are in their mid-40s.

The picture changed a bit six months after they moved to the area when Mike was laid off. That happened on a Tuesday—the Friday before they had sold their house in the Twin Cities after dropping the price significantly.

“We had everything figured out financially, but…,” says Mike, his voice trailing off.

He went to work for his brother David, who raises crops and livestock on part of the original Reil home place. This was good experience but the family knew they eventually wanted to farm on their own. This drive to make farming a full time endeavor was in part fueled by their oldest child, Tyler, who as a city kid used to visit his grandparents’ place and beg to stay out on the farm.

Things progressed when the family moved out onto the home place after Loren Reil got a house closer to the lake. They had immediate access to at least 80 acres of the Reil farm, and knew they wanted to focus on livestock production, specifically raising grass-fed cattle without chemicals or antibiotics. But the Reils also knew having a dream to farm wasn’t enough—they needed a clearer idea of what they realistically could do and what steps were needed to do it.

“We didn’t know how in the world it was going to work, but we had the desire,” says Mike. “It’s not like you go out and just feed the cattle a few bales of hay and hope it works out.”

During the winter of 2012, Mike and Tyler took the Land Stewardship Project’s Farm Dreams class, a four-hour interactive workshop designed to help people who are seeking practical, common sense information on whether sustainable farming is the next step for them.

Hard Lessons
After taking Farm Dreams, the Reils decided the logical next step was figuring out how to develop a more concrete business plan, set goals and begin networking with established producers in the area, particularly those who were raising livestock on pasture. So they enrolled in the 2012-2013 session of LSP’s Farm Beginnings course, which was being taught at the time in nearby Morris, Minn.

While taking Farm Beginnings, Mike and Linda participated in sessions on business planning, goal setting and marketing. Farm Beginnings is known for its use of established farmers and other agricultural professionals as class instructors. Students also have an opportunity to visit working farms that are using innovative production and marketing systems.

Through the course, the Reils learned the importance of developing a thorough business plan that considers as many scenarios as possible—both positive and negative.

“They take you through some exercises that aren’t a whole lot of fun—they make you think hard,” says Mike of the planning portion of the course. “And a lot of it doesn’t necessarily paint a pretty picture.”

“You have to figure out if there’s a market before you start producing, for example,” adds Linda

There is a growing demand in the region for pasture-raised meat and through the Farm Beginnings class the Reils met Jack McCann, whose True Cost Farm is a meat-based Community Supported Agriculture operation serving the Twin Cities. The Reils raised 500 meat chickens on pasture during the 2013 growing season. They had decided this would help get their feet wet as they learned the ropes of everything from pasture improvement to direct-marketing. The small cattle herd they’ve recently started—eight Lowline Angus cows and a bull—will not have beef ready for sale until 2015.

“The chickens help in that transition period,” says Linda.

It turned out their modest poultry enterprise was more of a learning experience than they bargained for. Pasture production went exceptionally well, and even marketing of the birds was relatively smooth. They sold the bulk of them through True Cost Farm, as well as some directly to consumers and through the Granary Co-op, which is in Ortonville on the Minnesota side of Big Stone Lake.

“We’re not in the best location for marketing so it helps to have True Cost do the marketing,” says Mike, who adds that McCann has also been helpful in providing recommendations on chicken care. And they have documentation of the fledgling enterprise’s successes that first year—as a 4-H project, their 12-year-old son Jared produced an impressive booklet complete with photos of the family’s foray into poultry production.

But then one of those “uncontrollables” reared its ugly head. During the summer the chickens started getting sick; it turned out the purchased starter feed the Reils were using had too much flax in it, causing a Vitamin E deficiency. After diagnosing the problem, they were able to restore the chickens to good health, but the birds’ rate of gain had been set back considerably. That brought their cost per pound up considerably, cutting into the family’s profits.

Fortunately, they hadn’t started out raising thousands of birds, and the Reils’ go-slow approach met that the feed situation was not a game changer.

Their conservative strategy turned out to be particularly prescient when it became clear the 220 acres of corn, soybeans, alfalfa and wheat they were raising on rented ground was going to take a significant yield hit in 2013 as a result of hail and drought.

“I guess we just have to roll with the punches,” says Mike philosophically.

The Push of the Next Generation
Right now the family’s main source of income is an on-farm machine shop Mike runs—he fixes everything from tractors to boats—and Linda’s job as a school bus driver. They use his brother David’s cropping equipment and they’ve found networking with other established farmers—something emphasized in Farm Dreams and Farm Beginnings—to be quite helpful.

“The networking has been huge—different people helping for marketing, contacts for grazing, help with cattle breed selections,” says Mike. “Everybody has been really, really willing to share. It wasn’t like they were guarding secrets.”

One of their mentors is Cliff Millsapps, who raises grass-fed beef near Gary, S. Dak., and markets direct to consumers. “He’s a wealth of information,” says Mike.

And for now the Reils are sticking with their go-slow approach. Through family connections and contacts from when they lived in the Twin Cities, they will have a market for their first marketable beef when it’s ready next year. They are also cautiously optimistic about the growing local demand for such products as the local food movement in the Big Stone Lake area grows.

“That’s kind of another part of growing slow,” says Mike. “Hopefully we can develop that market as we grow. We want to do it right the first time and give people a good product that hopefully they will get excited about as well.”

But they also know the younger generation may challenge their more methodical approach. Tyler, now 20, recently wrapped up a two-year agriculture production course at Lake Area Technical Institute in Watertown. Mike and Linda split the crop enterprise profits with their son last year, and he’s already working on building up a cattle herd.

“Tyler is going to be growing faster than us, I think,” says Mike. “He’s going to be taking off whereas we have to hold back and be careful. But he’s experimenting right along with us and we’re trying to show him on a smaller scale what works and is profitable.”

In episode 149 of LSP’s Ear to the Ground podcast, Mike Reil talks about being in the “experimental/making mistakes” stage of their farming enterprise.

Are you interested in land to farm and not sure where to begin? Are you wondering if you should find land first and then build your farm dream or vice versa? During this LSP introductory webinar, we will be using the Farmland Access Financial Decision-Making Tool as a framework. Register for this event here.