When it comes to farming, oftentimes things don’t work out as planned—and sometimes that’s a good thing.

Take for example Greg and Nancy Rasmussen, who on a recent fall afternoon are checking on some newly arrived chicks gathered under heat lamps in their barn. When the Rasmussens enrolled in the Land Stewardship Project’s Farm Beginnings course in 2002, they didn’t picture this as being part of their chore routine.

“That wasn’t what we wanted to do,” says Nancy. 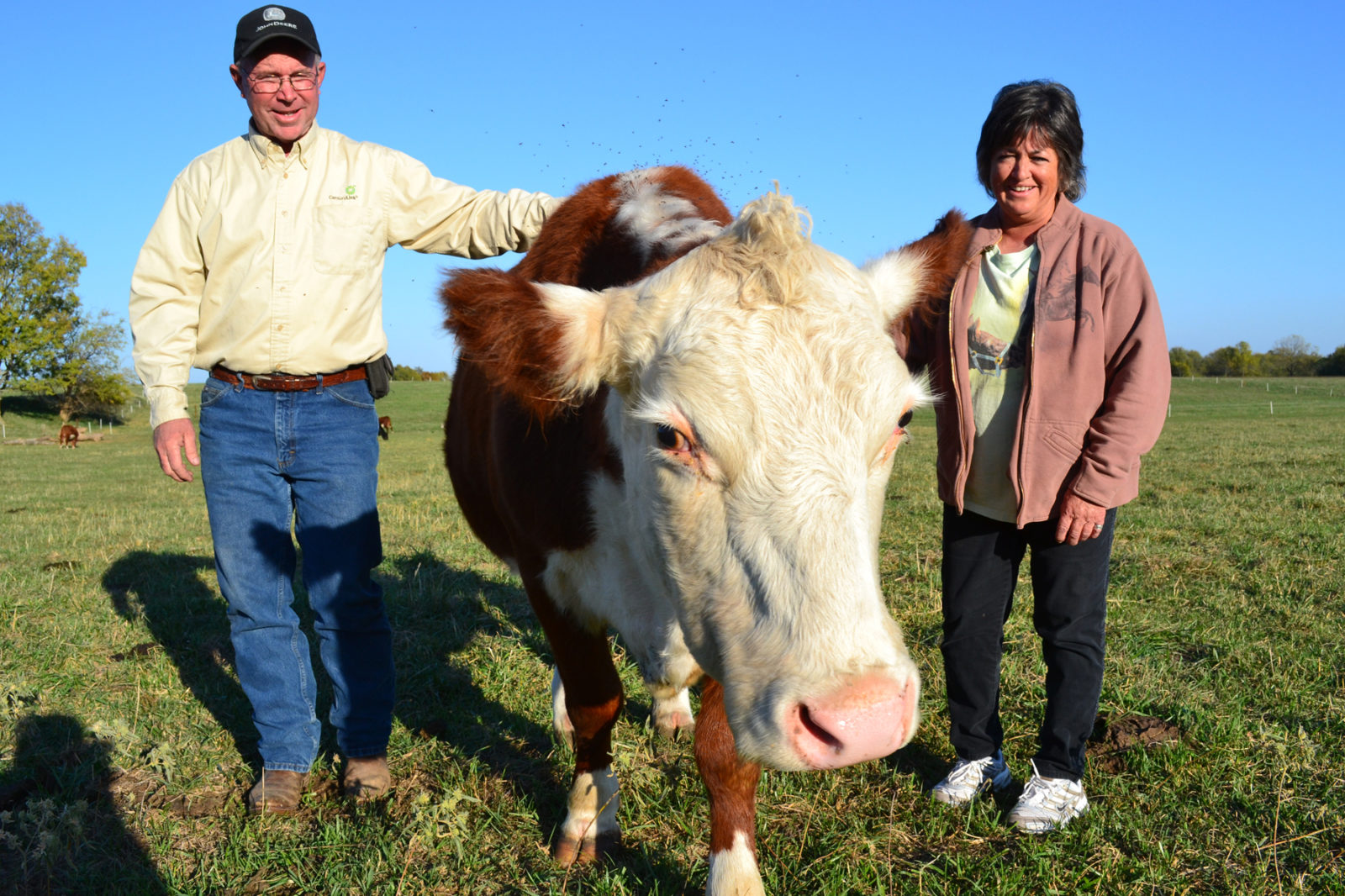 What the Rasmussens had planned was to develop a brood cow operation and ease into it so
that it could be a going venture by the time their four sons had left home and Greg retired — they are both in their early 60s and he’s been a telephone installer for over four decades. They wanted to eventually market calves through conventional channels such as sale barns. And they wanted those cattle to be Herefords, because, after all, “There’s nothing prettier than Herefords on grass,” says Nancy.

But then they decided that it would take a couple of years to get a beef operation going, so in the meantime, why not raise a few chickens?

Not that the dream of raising beef cattle on their 65-acre southwest Missouri farm has been dropped. Since they launched it in 2004, the Rasmussens’ Sunny Lane Farm has built up a 20-head cow-calf herd of Polled Herefords, as well as a herd they grass finish. They also have a sheep flock. The animals are raised on rotationally grazed pastures, which was part of the plan, by the way.

But when it comes to marketing these animals, well, that hasn’t followed a predetermined route either. Sunny Lane direct markets everything these days.

“You should have heard us the first year—we thought, ‘We can’t do all this,’ ” says Nancy.

Blame their flexibility on some of the farmers they met while taking Farm Beginnings. During the winter of 2002-2003, the Rasmussens drove from western Wisconsin where they were living at the time to Rochester, Minn., for twice-a-month classes. The classes were taught by established farmers and other ag professionals from the community, many of whom had taken various circuitous routes to launching successful agricultural enterprises.

The Rasmussens say their ability to roll with the punches and take advantage of opportunities is a result of the course’s emphasis on business planning and financial goal setting. Neither Greg nor Nancy grew up on farms, but both had worked on the farms of grandparents during summers when they were young.

“We had experience putting up hay, moving cattle and different chore type work, but as far as the planning and business end of it, we didn’t have a lot of farm experience that way,” says Greg.

What they learned from developing business plans and from being mentored by established farmers was that there was a good market for pasture-raised livestock if they were willing to do the marketing themselves. The Rasmussens worked directly with Eric and Lisa Klein, 1999 Farm Beginnings grads who have built up a thriving direct-to-consumer pork and chicken business over the past decade or so. They enjoyed the work they did with the Kleins on their farm, and wanted to begin an operation of their own.

But once they graduated from the course and started looking around for land in southeast Minnesota, they found it difficult to find anything affordable. They finally found a farm in southwest Missouri for around half the per-acre price of land in Minnesota. Greg got a job with a local telephone company in Missouri, helping seal the deal.

It turns out they landed in a good spot: two regional centers—Springfield (pop. 159,000) and Joplin (pop. 50,000)—are each 45 minutes away. To top it off, they have two meat processors within a 15-minute drive. Conversations with owners of local health food stores made it clear there was a pent-up demand for meat produced using grass and other natural methods.

Along with the chickens, each year the Rasmussens market 20 cattle (individual cuts and quarters and halves) and 30 lambs. They are at farmers’ markets three days a week and make deliveries to two health food stores and a restaurant.

“The demand for naturally raised products has been the biggest surprise to me,” says Greg, adding that the market is so good they are now looking at renting additional land to graze more animals on. “Down in this area the demand is so high for naturally raised meat that we could probably easily double what we’re producing and still sell it.”

Right now the farm is covering the expenses of running it, and the ultimate goal is make it a venture that can support the couple long after Greg leaves the telephone business.

“But the problem with raising more livestock now is finding the time,” says Greg, adding with a smile, “Maybe that’s another incentive to retire.”

Adjusting to the region

That kind of confidence is rooted in the knowledge that he and Nancy have dealt with curve balls since starting their farming operation, and pretty much fielded them. The latest challenge has been producing good pasture in this part of Missouri, which is on the Ozark Plateau, west of the Ozark Mountains. It’s characterized by poor soils, mild winters and hot summers. Just west of their farm the land is flat, providing ample areas for corn, soybeans and winter wheat. To the hillier east, crop fields give way to pastures dominated by fescue grass, which can be hard to manage.

“We were not used to the Ozarks weather and grasses at all,” says Nancy as she and Greg check on their herd of Hereford cows, their red and white coats brilliant in the slanting rays of a late autumn sun. “We were really surprised at how different it is here.”

But as the Rasmussens did with their farming career in general, they have dealt with local twists in climate and soil by taking a go slow approach. Soon after moving to the farm they tested the soil and found it was short on nitrogen, prompting them to use seedings of lespedeza (Japanese clover) and red clover to build up the fertility of the pastures. They also received cost-share funds through the USDA’s Environmental Quality Incentives Program to put in water lines for their rotationally grazed paddocks, thus reducing the amount of walking cattle have to do and cutting soil compaction.

The Rasmussens did not jump right into owning cattle. When they purchased their farm in 2004, it consisted of perimeter fencing, a house and a small barn. Although Greg and Nancy had seen how farmers like the Kleins rotationally grazed in southeast Minnesota, they weren’t sure how to execute it in this part of the country.

So, the Rasmussens “started in reverse” as they put it. In 2005 they began custom grazing a neighbor’s cattle to get the hang of setting up a grass-based system in this part of Missouri.

“While grazing our neighbor’s cattle, we experimented with different paddock designs we would like to use when we got our own cattle,” says Nancy. “That was a nice way to do it.”

As Farm Beginnings graduates, they qualified to receive a no-interest livestock loan through Heifer International. In 2006 they used the loan to launch their own herd with 15 heifers.

What they learned from their “practice” grazing was that in this part of Missouri, when the spring flush of grass comes, it comes on strong enough that it can be hard to keep up with. That’s why the Rasmussens utilize a form of “mob grazing”—putting lots of animals in a small area for a short amount of time. The farmers also learned how to deal with fescue, which, if managed properly, they’ve found to be a good forage that’s quite drought tolerant.

Learning the ropes of Ozark pastures has paid off. The region has experienced a severe drought recently. Greg shows a photo of their pastures taken in August—the grasses were yellow with dormancy, offering a stark contrast to the green trees in the background. But by fall, rain had helped the pastures come back to life. The Rasmussens had to start supplementing the pasture grasses with hay earlier than normal this year, but felt their paddocks weathered the drought well.

In fact, grass-based livestock production in this part of the country held a pleasant surprise for the couple: they can graze from April to January, providing roughly three extra months of pasturing compared to places like Minnesota.

But as a dried out pond next to the barn indicates, farming can still be a challenge in this region. The Rasmussens recently received a USDA Sustainable Agriculture Research and Education (SARE) grant to catch rainwater off a barn overhang and pipe it to the pond a couple hundred feet away. They plan to eventually use a solar pump to deliver water to the cattle on a side of the pond where rocky ground prevented putting in water lines.

While the Rasmussens check on their market cattle that are being grazed in paddocks laid out in narrow, neat strips, Keygan Brunner, a quiet high school student, walks over from his family’s homestead, which shares a fence with Sunny Lane Farm. During the week, Brunner helps with livestock chores to earn a little extra pocket change and because, as he puts it, “I like working with livestock.” As the teenager tends to the cattle and chickens, the Rasmussens talk about how Farm Beginnings prepared them for participating in a farming community in another surprising way: they’ve seen the importance of reaching out to other new farmers.

Greg and Nancy have spoken to beginning farmer classes put on by the University of Missouri, and Nancy talked one area farmers’ market into being a year-round venue with the argument, “If they can do it in Rochester, Minnesota, why not here?” In September, Nancy was named Ag Woman of the Year at the Missouri Women in Ag conference, and in July the Rasmussens were on the cover of Missouri Farmer Today.

When telling their story to other beginning and wannabe farmers, the Rasmussens are giving back a little of what they gained from hearing farmers speak at the Farm Beginnings classes in Minnesota.

“They told you the good things and the bad things,” says Greg of the class presentations. “Because things don’t always go smoothly.”

Or, as he and Nancy have discovered, “as planned.”

In episode 110 of LSP’s Ear to the Ground podcast, Greg Rasmussen talks about adapting to a new geographic farming region.