Nearly seven years ago, northeastern Iowa farmer and Natural Resources Conservation Service (NRCS) district conversationist, Todd Duncan, along with a group of local producers, started looking for tangible solutions to the erosion problems they were seeing on their farms. These farmers had already been implementing NRCS’s best management practices when it came to conversation, but they were still having problems; in some cases, they were even going backwards. 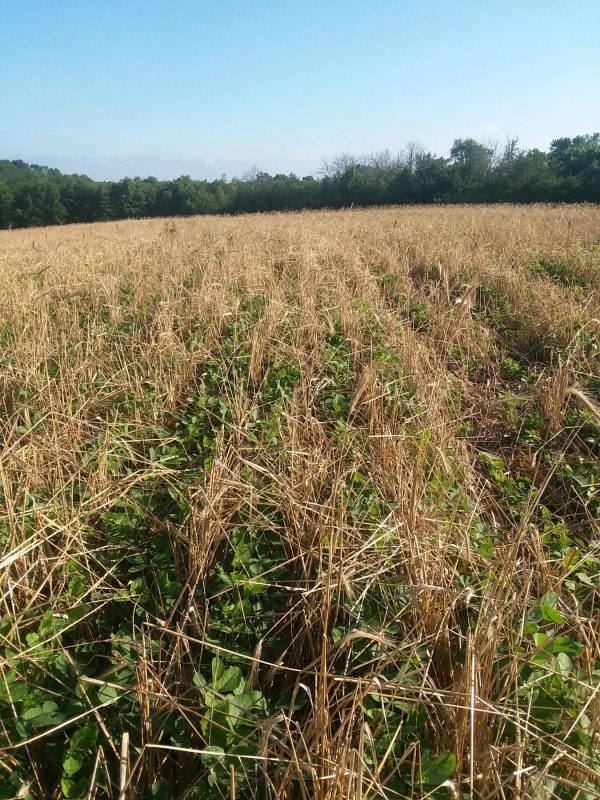 Soybeans emerging through rye after the cover crop has been terminated on Todd Duncan’s farm.

“Never before in the history of farming have we managed the land with continuous annual row crops.” Duncan told me. “This system with tillage is degrading the soil and its ability to function. The first step is to disturb the soil as little as possible and build soil aggregate.”

Through his experience as a farmer and work as a conservationist, Todd got introduced to the principles of soil health, which he described as a “light bulb” moment in his life. He talked to the producer group about how principles such as armoring the soil, minimizing soil disturbance, and keeping living roots in the ground year-round could help them manage the erosion problems they were experiencing. Together, they took it upon themselves to do their own self-development with the goal of figuring out how to make soil health work on their farms.

The first two-to-three years were focused on keeping the soil in place, which meant reducing tillage and getting the water cycling again. During that time, Duncan observed the soil mellowing and allowing water to infiltrate better. Once he had developed a consistent no-till system on his operation, he introduced cover crops into his rotation by planting rye in the fall and allowing it to overwinter. Not until years four and five did Duncan start seeing the soil regenerate by way of better nutrient cycling. He could tell the biology was working by the way residue broke down quicker and the higher nutrient credits he was seeing in his soil tests. 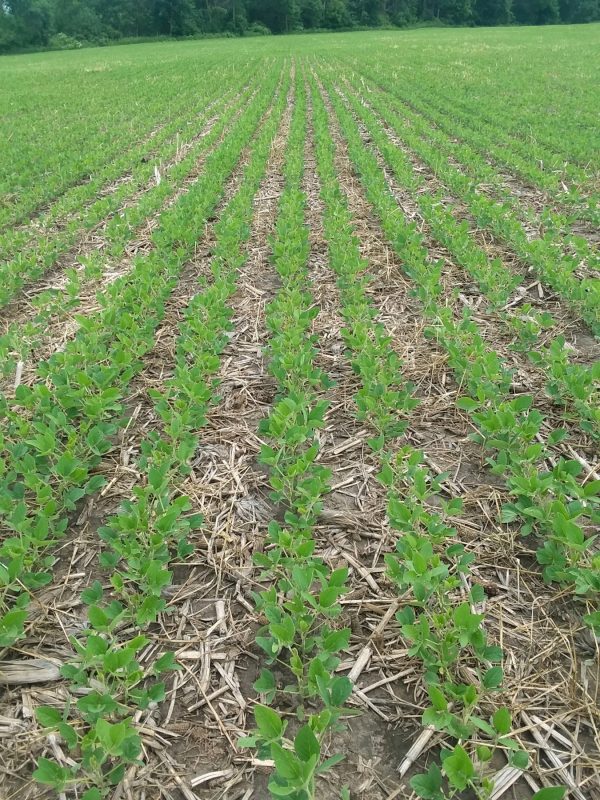 Residue breaking down between the rows of Duncan’s soybeans as a result of good nutrient cycling in healthy soil.

One scenario he describes for getting started on making soil-friendly changes is to pick a field to start the conversion on and sticking with that field for multiple years in order to receive the full benefits of healthier soil. Looking back, he feels strongly that starting with a solid entry point, such as seeding rye into the harvested corn residue, is the way to get your feet wet. Ideally, a producer would use an early season variety of corn so they can get that fall rye cover crop seeded in plenty of time for it to get established before freeze-up.

The following spring, soybeans can be seeded into the overwintered rye, which is later terminated with herbicide. Now, at this point, Duncan stressed the importance of not panicking when planting “green” into standing rye. Rye is a grass and soybeans are a legume, making for a complementary match. In fact, he said many farmers used to plant — and some still do —a similar mix involving oats under-seeded with alfalfa.

After the soybeans are harvested in the fall, Duncan suggests planting winter terminated or winter hardy species as a cover (oats would be an example of a winter-terminated cover crop and cereal rye would be a winter hardy species). By the time that the next corn planting takes place the following spring, two cover crops and the no-tilled plantings of soybeans have conditioned and readied the soil. Implementing a rotation like this one means the first two out of three years of the soil health system are soybeans, which Duncan notes helps get the water and nutrients cycling. 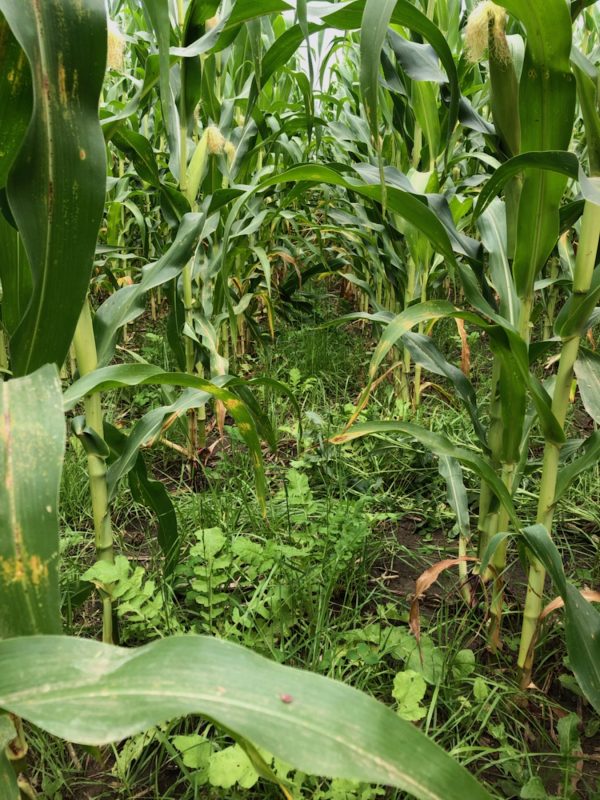 This July photo shows a cover crop that was interseeded into Duncan’s corn.

In six years of implementing these practices on his farm, Todd has measured his soil organic matter (SOM) levels going up by 1 – 2/10ths per year, which has resulted in a 1% overall increase in SOM. The other farmers in his producer group have seen similar increases in organic matter and have continued to increase the number of acres managed under no-till and cover crops.

Increasing organic matter by 1% increases available water capacity by about 3,400 gallons per acre for medium-textured soil, according to Anna Cates, the University of Minnesota’s state soil health specialist. “That’s 3,400 gallons in the soil, instead of lost as runoff,” writes Cates. “That water prevents drought stress and holds soluble nutrients, like nitrate, that plants will be able to access.”

The nutrients found in each 1% increase in SOM can amount to, on a per-acre basis, 1,000 pounds of nitrogen, as well as 100 pounds of phosphorus, potassium, and sulfur, respectively, according to Ohio State University.

Today, Duncan’s farm is 100% no-till and cover-cropped and he says he’s now at the point that if N-P-K prices were to sky-rocket tomorrow, he could probably afford to eliminate them as a source of fertility and not take much of a yield hit. The nutrient cycling takes time, he stressed to me, and he’s working on it.

When it comes to next steps in Duncan’s soil health journey, well, he continues to work on building diversity and more living roots year-round with the interseeding of cover crops into corn. He’s also introducing pollinator species and has even managed to squeeze in time for a book club at his local NRCS office where they read and discuss well-known titles like Dirt to Soil and The Dorito Effect. “I am learning to be okay with uncomfortable because that’s where I learn and grow,” he said. 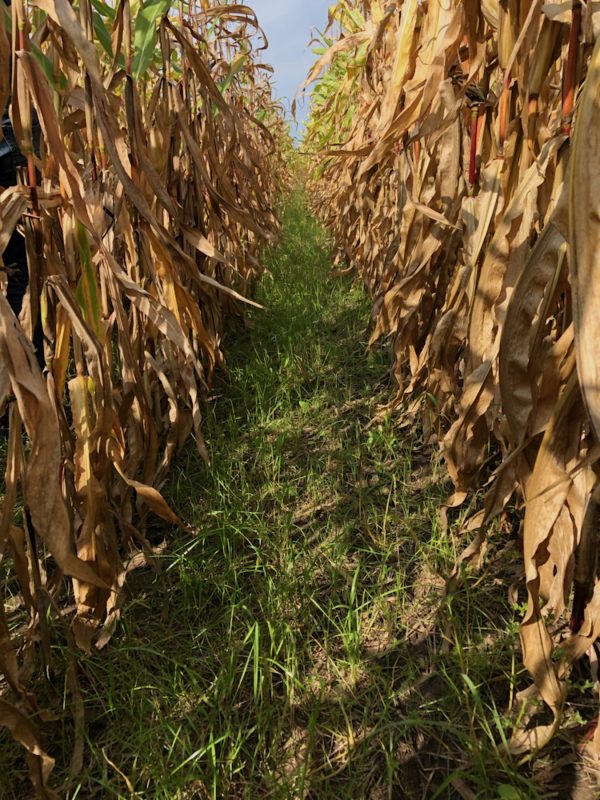 The interseeded cover crop later in that fall.

Want to reach out to Todd? Contact him at: