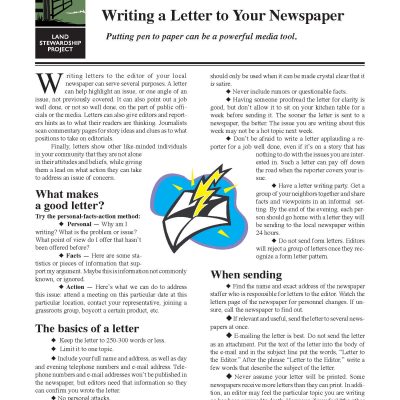 Looking for tips on writing a letter-to-the-editor? Check out LSP’s fact sheet.

During the past two years, a dairy CAFO in Minnesota’s Winona County has made repeated
attempts to force through an unprecedented expansion that could have profound negative impacts on the community. At issue is Daley Farm’s proposal to add roughly 3,000 animals to its existing operation, which would put the operation at around 6,000 animal units, almost four times the county’s animal unit cap of 1,500 animal units. That cap is equivalent to 1,071 dairy cows, 5,000 market hogs, and 1,500 beef cows/steers; the overwhelming majority of livestock operations in Winona County and across Minnesota are well below this limit, meaning this cap readily allows for a family farm-based system of livestock agriculture. Such a cap is particularly important in a region like southeastern Minnesota, where groundwater is vulnerable to contamination as a result of the porous karst geology that predominates.

However, the Daley Farm proposal is seen as a bellwether by Big Ag in Minnesota, as its supporters push a model of agriculture that leaves no room for small to medium-sized farms. As a result, immense pressure has been put on public officials to capitulate to Daley Farm’s demands and set a new standard for what kinds of dairies will dominate our communities and how the rules apply to them.

In 2021, despite widespread public opposition, Daley Farm made yet one more attempt to blow by the cap via the court system as well as Winona County’s Board of Adjustment. In both cases, the will of the people was upheld, and the CAFO’s proposal was denied.

A major reason that, despite backing from powerful interests, Daley Farm has not been successful in ignoring common sense rules is that Winona County residents have repeatedly made their voices heard. Their message is  clear: exceeding the animal unit cap is not good for the land, water, family farms, or rural communities.

One way they’ve made their voices heard has been through letters-to-the-editor published in local newspapers. Below is a sampling of those letters:

Winona County residents gathered on Nov. 28 to call for the Board of Adjustment to deny Daley Farm’s request for a animal unit cap variance.

It’s that time of year again: the Minnesota state legislative session is almost upon us, and with that the opportunity to advocate for a more just and sustainable farm and food system! Together we will continue to advance our comprehensive soil health bill and make investments in our farmers, communities and soil health, a top priority for our state. In this meeting we will get grounded in what the next few months hold for us, learn opportunities for how you can get involved in this campaign, and together continue to build the people power we need to move forward our bold vision: 100% of farmland utilizing soil healthy practices. Register for this event here.

Join the Land Stewardship Project’s Healthcare Steering Committee for a virtual town hall with Minnesota Attorney General Keith Ellison. We will discuss how the people of Minnesota can take control of our healthcare system by addressing the ever-rising costs of prescription drug prices and deductibles. For more information, contact us at 612-722-6377 or policy@landstewardshipproject.org. Register here: https://secure.everyaction.com/AZp6pifq0k6yCDAAPYQznQ2

Join Land Stewardship Project and UMN Extension for a series of online forums this winter to address resiliency on our farms.  From the changing climate to the external and internal pressures impacting our farms, our strength lies in coming together collectively to support one another and to provide inspiration for addressing these challenges.

We will be bringing farmers together to collectively increase our resiliency through a series of 4 online forums this winter.  The format will include a video interview with farmers using innovative strategies to improve their farm resilience followed by a live Q&A.  There will also be an opportunity for peer-to-peer dialog. Please join us!

Riddle will deliver his talk, “Let’s Get Real: Protecting Organic from the Ground Up,” at 9 a.m. EST on Saturday, Jan. 29. Riddle will be followed at 10 a.m. EST by Winona LaDuke, who will deliver, “All Our Relations: Native Struggles for Land and Life.”

The NOFA-NJ conference will include sessions on agrobiodiversity politics, agroforestry, urban farming, human health, and the plant-based food movement.

For more information and to register, visit:

Cattle producer Alejandro Carrillo will tell the story of how he has used regenerative grazing to build soil health and bring his ranch back to life. Presentations by local farmers, small group discussions and a time for questions will be part of the day’s programming at each event. The cost to attend is $10 per person. For more information or to RSVP, contact Land Stewardship Project by Jan. 28 by calling 507-523-3366. Register here.