Note: Earlier this summer, Land Stewardship Project soil health organizer Alex Romano reached out to one of our soil health steering committee members, Mike Seifert, who farms near Jordan, Minn., with his wife, Dana, and father, Big Mike, to ask for his thoughts on “return on investment” from cover crops. She wanted to know his approach to and considerations regarding those calculations when making decisions about cover cropping strategies. He was happy to respond to her question. But he found that as he sat down to consider the question and write about it, thoughts that emerged brought up deeper, heart-level questions for him. These are issues that farmers and non-farmers alike grapple with, but that can be difficult to verbalize, let alone wrap our heads around. Members of LSP’s soil health team were moved by the perspectives and deeper questions that Mike outlined with such clarity and thoughtfulness. So, with his permission, we’re offering up the farmer’s response to the “ROI” question: 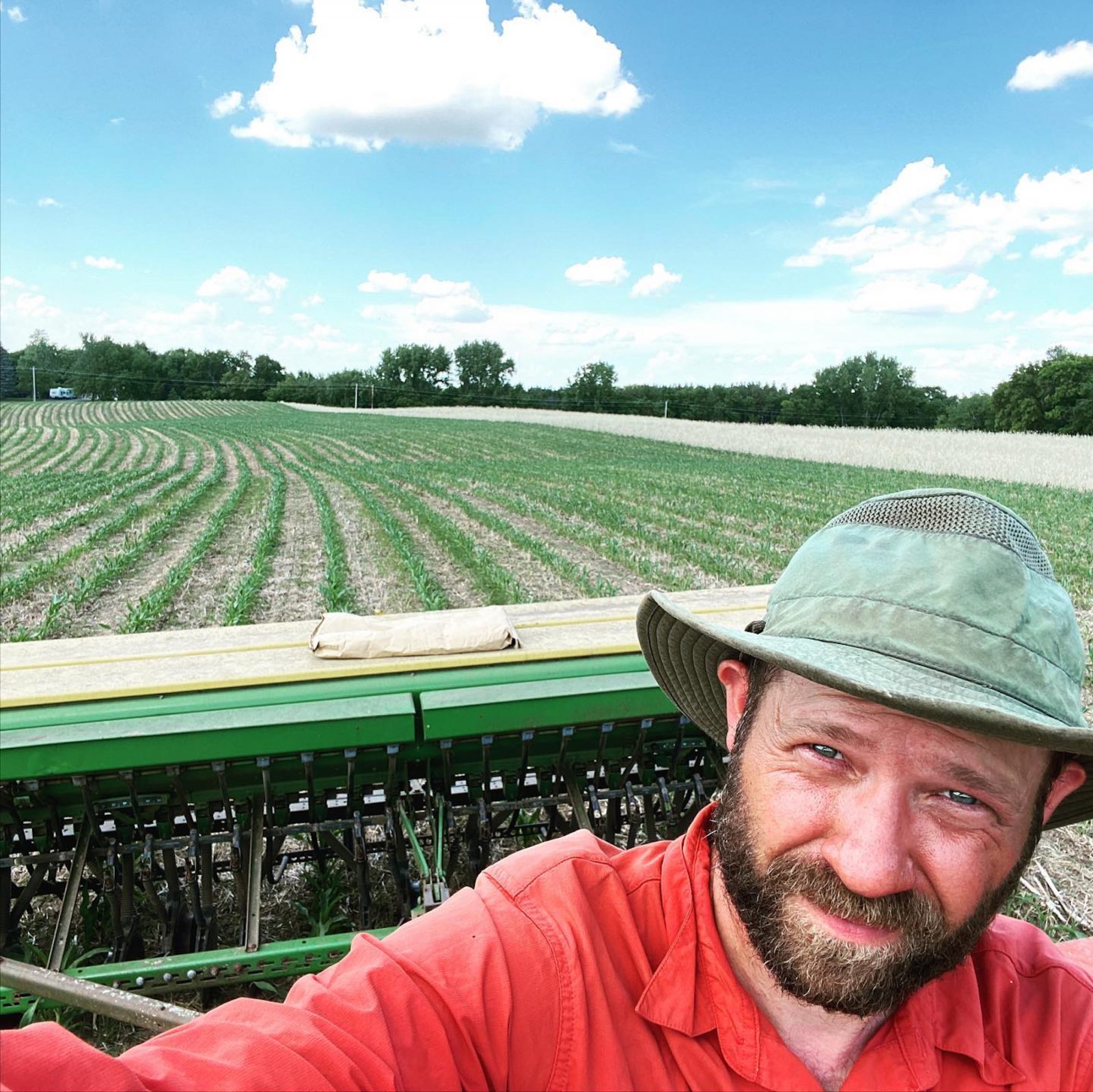 Oh boy, that’s a big, open-ended question. When I saw your e-mail come in a couple of days ago I said to myself, “I’m going to have to sit down in the office to answer this one.” So I hope you don’t mind if I riff on it for a while over my morning coffee, and try to outline the multiple perspectives I have on return on investment and cover crops.

So, when I hear the term “return on investment,” my first reaction is a financial one, since that term is rooted in matters of finance. As such, let’s tackle that aspect of the term first.

From a farm bookkeeping perspective, cover crops are an added expense, and the financial benefit we as farmers get from using cover crops is this amorphous thing that’s hard to pin down. All of the physical benefits from cover crops — improved soil structure, nutrient cycling, feeding the soil biological community, reduced erosion, armoring the soil surface, potential feed for livestock, alleviating compaction, adding organic matter, and on and on — are wonderful, desirable enhancements, but they’re really hard to quantify and translate to financial numbers, and a lot of them are cumulative over several years. I suspect some benefits are even exponential — that is, once you get your soil on a healthy path to recovery and practice careful management, the feedback loop will become positive and actually accelerate until the soil environment achieves a more natural balance.

But how do you put a dollar sign on any of that? It’s absolutely nothing like traditional agronomy, which loves easy charts and figures. Two hundred units of nitrogen will grow 200-bushel corn! Nothing to it! If the fertilizer is affordable, it’s a slam dunk! Just ignore the part where you’re destroying the natural cycle of things. We’ll worry about that later.

So for me, cover crops have to be taken as a long game when it comes to return on investment. And since I really can’t quantify how much my farm production will increase as a result of using cover crops, I just have to take it on faith that it will, and that I will more reliably and consistently produce successful cash crops — particularly on my most fragile and degraded acres. Four years into a method of farming that includes cover cropping, I’d say we’re starting to see that, but I think the best is yet to come, so we’ll continue to be patient and try to do the right things.

Now, if cover crop ROI needs to be taken as a long term investment, how do we reconcile the extra expense in the short term? For me, that one was easy: we pair it with no-till. I think the money we’ve saved in fuel alone each year has covered the extra cost of cover crop seed. Then factor in reduced equipment costs and time savings, and it starts to be a big win. This year, we’re growing our own winter rye for seed, so that’ll knock expenses down even more. So there are lots of ways to offset the short term costs which then, over time, become another part of the long term financial benefit of cover crops.  But you have to combine complementary practices to really get the full benefit of each.

No-till and cover crops augment one another. Diversifying your crop rotation and incorporating livestock each add another reinforcing layer to the financial structure. They also add more work and management! But I think the financial benefits outweigh the added time and attention, and open up more opportunities to be flexible — which is increasingly important in a world that constantly throws us financial and climatological curve balls.

So that’s my take on the financial aspect of ROI and cover crops.

But now I’m going to stray into another aspect of all of this, which is more of the moral and ethical aspect to regenerative agriculture. I’m currently reading two books.  The first is The Uninhabitable Earth by David Wallace-Wells, and the second is Braiding Sweetgrass by Robin Wall Kimmerer. It’s actually a pretty good pairing, because the optimistic and insightful prose of Kimmerer’s book pretty effectively mitigates the sheer terror of Wells, who is out to demonstrate with evidence that when it comes to climate change, we’re already waist-deep in the rapidly rising shit and just trying to pretend the smell is normal.

The fact is that in the coming years and decades, our food production system is going to be under an enormous and increasing strain. If we can’t figure out how to exist on this planet without merging our civilization into a more harmonious rhythm with the natural world, then any talk of financial ROI — whether it be in cover crops or real estate or the latest share price of Tesla stock — is all going to become a very moot point. You can’t put a dollar amount on the survival of our species and the other roughly 8.7 million species with whom we share this delicate biosphere. We consistently fail to see that we’re completely dependent on the very biological systems that we are methodically destroying, and that has to change. It just simply has to. Right now.

I could go on and on, but that’s a depressing subject, so I’ll get to the point. When it comes to cover crops and other agricultural practices that help preserve and revitalize the ecosystem, I personally only look at the financial aspect of all of this as much as necessary. I do my bookkeeping and make sure we pay our bills so we can keep going, but I try not to let the financial side of agriculture cloud my vision of the larger picture. We need solutions, so I try to keep over 50% of my focus on finding and experimenting with practices that are going to make our food production system more resilient, while also sequestering carbon and providing habitat for as many of our fellow terrestrial organisms as possible. If every agricultural producer started shifting to that mindset, we’d be getting somewhere.

In my mind, the real return on investment from all of this will be a habitable (hopefully even pleasant!) planet to live on, and the ability to look in my kid’s eyes and tell her I did everything I could to be a part of the solution.

In episode 269 of LSP’s Ear to the Ground podcast, Mike Seifert talks about how a creepy crawly experience in the dark of night convinced him he was on the right soil health path. A recent Land Stewardship Letter article describes the Seifert family’s transition to no-till and cover cropping. For more on how to build soil health profitably, check out LSP’s Soil Builders’ Network web page.

We are confronting many challenges on our farms and in our rural communities: from extreme weather to land access challenges for beginning farmers, as well as corporate interests influencing so much of our food and farming system. But we have an enormous opportunity to address these challenges through the upcoming 2023 Farm Bill!

Join us for the Land Stewardship Project’s Farm Bill Platform Launch Aug. 16, from 6 p.m. – 8 p.m., at the Legvold Farm in Northfield, Minn.

With the rising cost of food and continued supply chain issues, our communities are facing ever increasing uncertainty. Many are left asking: Where will our food come from? A more secure and sustainable food system is within our reach. If we increased direct sales of food in Minnesota to 1% of all agricultural sales, we’d have an additional $76.25 million going directly to farmers.

We need you with us to make sure we can make this a reality! Join Land Stewardship Project members and supporters on Wednesday, Aug. 17, from 1 p.m. to 2:30 p.m., in Appleton, Minn.

Come and share your ideas about how we can connect farmers, consumers, and food businesses to coordinate markets and support economic development through local foods. We’ll also talk about how the next Farm Bill can help direct federal resources toward community food security, health, and economic vitality.

Join the Land Stewardship Action Fund to learn about deep canvassing, what it is and why it’s important, and get trained on how to deep canvass so you’re able to powerfully participate in LSAF’s upcoming deep canvasses and put these important skills to use in your community. Register at https://secure.everyaction.com/E1P8BQcq0EizUZLDvtQwUw2.