On a January evening in western Minnesota, Carol Ford braves 20-degree temperatures and a wind that’s packing snow as she walks the few yards from her house to the garage. Once inside, she approaches a door with a colorful, hand-painted sign above it that reads: “The Door into Summer.” She opens the door and, sure enough, steps into an 18 x 24 patch of pleasantness that, although not quite summery, could pass for a decent day in early spring. Fat green rows of garden greens—arugula, mustard greens, spinach, kale, broccoli, pok choi, kole rabi— are growing on the dirt floor and in rain gutters dangling from the ceiling of a passive solar greenhouse attached to the south side of the garage. 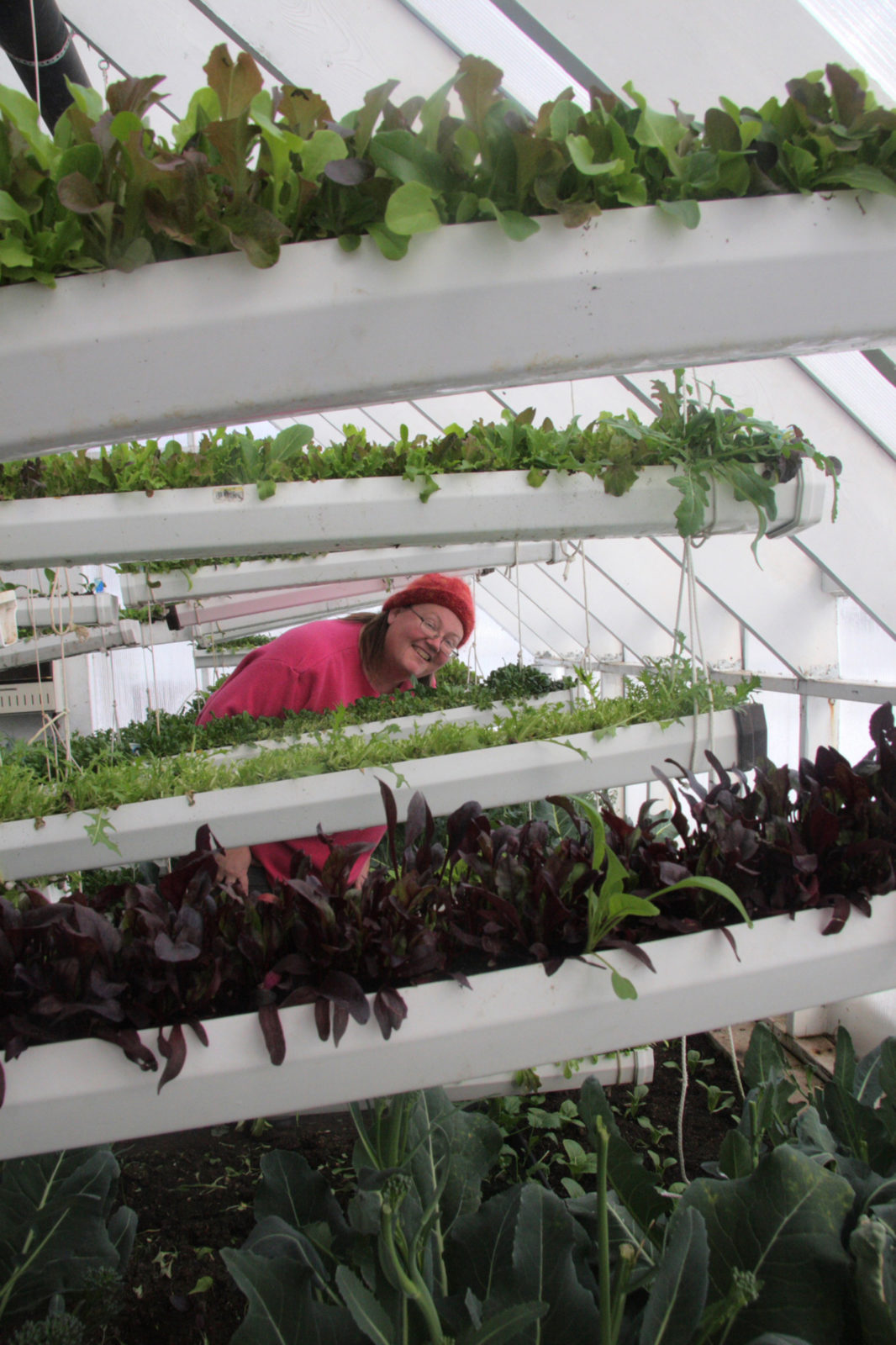 As snow hisses against the double-paned polycarbonate walls, Carol checks the thermometer on the wall: 50 degrees. That’s 50 degrees with no help from artificial heat. It is what’s left over from earlier in the day when the temperature in the greenhouse hovered around 80 degrees-plus. Super-insulation and small fans will easily keep the temperature above 40 degrees on this night. That means the 15 families that belong to the Garden Goddess winter Community Supported Agriculture (CSA) operation will be getting another delivery of greens later this week.

“This is the result of thinking outside the box of the box,” says Ford.

That’s Ford’s diplomatic way of saying that a few years ago when she and her husband Chuck Waibel were first talking about the idea of growing greens in the middle of a Minnesota winter without the help of grow lights and supplemental heat, she was met with a bushel-basket full of skepticism. “The Door into Summer” is taken from the title of a Robert Heinlein novel. The novel is science fiction, and Carol concedes that when she was first talking about her idea some people thought she was from another planet. The Garden Goddess winter CSA may be based on a little science, but it’s far from fiction.

A lot of engineering, research, creative agronomic skills and business planning have gone into this winter CSA, which will begin its third season in October. Ford and Waibel credit the Land Stewardship Project’s Farm Beginnings course with giving them the ability to get this unusual enterprise up and running. Twice a month during the fall and winter of 2002-2003, they made the 20-minute drive from their house on the edge of Milan to Montevideo, where established farmers and other ag professionals provided insights into low-cost, sustainable methods of farming. The course provides workshops on goal-setting, financial planning, business plan creation, alternative marketing and innovative production techniques. In addition, class participants have an opportunity to network with established farmers and utilize them as mentors.

“It was one of those things where it was the right thing at the right time,” says Ford of Farm Beginnings.

Ford, a master gardener, needed an enterprise that would allow Waibel and her to maintain their regular jobs while keeping their financial risk low.

“One of the things they taught us in Farm Beginnings was risk management,” says Ford. “And it felt safer to start something like this on a small enough scale that I wouldn’t have to quit my job.”

They struck on the idea of a small CSA operation that would fill a yawning gap in the local market: winter greens.

Through the course, Ford and Waibel learned how to research and create the kinds of information networks needed to develop an enterprise that is breaking new ground. They also learned how to create a business plan that would make it possible for a completely off-the-wall proposal to be taken seriously by lenders (Garden Goddess was rejected by three lenders before finally getting a loan).

Waibel has a collection of 1970s-era solar publications, and Ford used her computer research skills to track down every bit of information on passive greenhouses available. There were plenty of options that consisted of using gas heaters and grow lights. But they wanted to keep it simple and inexpensive and as low-energy as possible. They were told repeatedly—even by a Farm Beginnings instructor experienced in extended season vegetable production—that the system they wanted would not work. But the couple soldiered on.

They eventually combined thermodynamics and innovative organic vegetable production techniques to create a winter garden amidst thousands of acres of frozen corn and soybean fields. Greenhouse vegetable production is nothing new. But the design, operation and low-input nature of this one are fairly unique. Through the help of a clever system that utilizes insulation, heat storing rocks and fans, the greenhouse produces greens almost entirely without the benefit of supplemental gas heat.

“When I was designing this I was looking at it as if it was going to be on Mars,” says Waibel, showing a schematic that tracks the strength of the sun’s rays from early to mid- and late-winter. The key to the greenhouse’s success is the sharp angle of the southern-facing semi-transparent lean-to type roof. “We’re trying to gather every bit of sunlight available,” he adds.

Ford estimates they use about $50 worth of propane per season to heat the greenhouse during unusually long stretches of cloudy weather. The fans have raised their electric bill by about $60 per season.

Like a traditional CSA operation, Garden Goddess sells subscriptions to consumers. In return, they provide a weekly delivery of fresh, organic produce (deliveries are supplemented with root storage crops like potatoes and onions that they raise outside during the regular season). But that’s where the similarities end. Garden Goddess is starting its season just as other vegetable operations are shutting down for the year: deliveries are mid-October to mid-April. Don’t get the wrong idea: the winter CSA isn’t a 100 percent replacement diet-wise—cold-tolerant members of the brassica family dominate here. But an impressive variety of herbs and greens can be produced in such a system.

The Garden Goddess winter CSA system has garnered attention from people other than greens-craving consumers. Ford recently presented at the Homegrown Economy

Conference, an event sponsored by Collin Peterson, Chair of the U.S. House Agriculture Committee. The focus of the conference was how local food systems can fuel local economies. Ford’s presence at the event was a sign that local food production enterprises like Garden Goddess are being taken seriously by those interested in rural economic development. Ford and Waibel are also working with LSP’s Montevideo office and a group of other Milan area farmers who direct market food on a proposal to convert the cafeteria of an abandoned school into a value-added processing center. The greenhouse has even attracted the attention of groups looking for ways to reduce greenhouse gas emissions by cutting energy use. Ford and Waibel are spreading the word on their winter system any way they can—they recently received a grant to write a guidebook on how to set up and operate such a building.

The operation demands about five to six hours of the couple’s time weekly. Both Ford and Waibel have other jobs and although the CSA is breaking even—the total price tag for the greenhouse system was around $18,000—it’s not their main source of income. They have no desire to do something like this on a mega-scale and supply all of western Minnesota with greens during the winter.

Ford and Waibel see this kind of enterprise as a perfect low-risk venture that could be dispersed throughout the countryside in a variety of forms. The simple, compact nature of their greenhouse design would be a perfect fit for farms that have other enterprises going. It could also work on the roof of a hospital or school, on the side of a nursing home, or in the back of a restaurant.

“This is obviously not something that anyone’s going to quit their bank job for,” says Ford. “But it could be one component of a diversified farm, and even at this size could provide enough income to make it so someone doesn’t have to go into town for an off-farm job. And that’s when it becomes exciting to me.”

LSP’s Ear to the Ground podcast episode 29 features Carol Ford talking about raising greens in the depths of a Minnesota winter.