It’s field day time on this western Minnesota farm, and it’s made clear from the outset that there will no main presenter, no expert from on-high telling it like it is or isn’t, no PowerPoints produced by consultants. This is a field day where farmers learn from other farmers.

“You are all consultants,” Richard Ness tells the roughly 20 people who have gathered in the shade of a Stevens County farmstead on a Saturday afternoon in July.

In attendance are a few grass-based livestock producers, a couple that has been producing certified organic crops for over a decade and a half, a dairy scientist, at least one employee of an area farm, and a few neighbors who have experience with everything from cover cropping to livestock health to milling raw lumber. This is a perfect storm of gray matter, and the timing couldn’t be better for the host farmers.

Derek and Carrie Redden are in the midst of transitioning some family land that has mostly been rented out for row crops during the past few decades into a grass-based organic dairy. Since graduating from the Land Stewardship Project’s Farm Beginnings course in 2011, the young couple—Derek is 32 and Carrie is 31—has been planning how to make this into a farm that can support them as well as their two children, Dorothy, 3, and Elvin, 2. 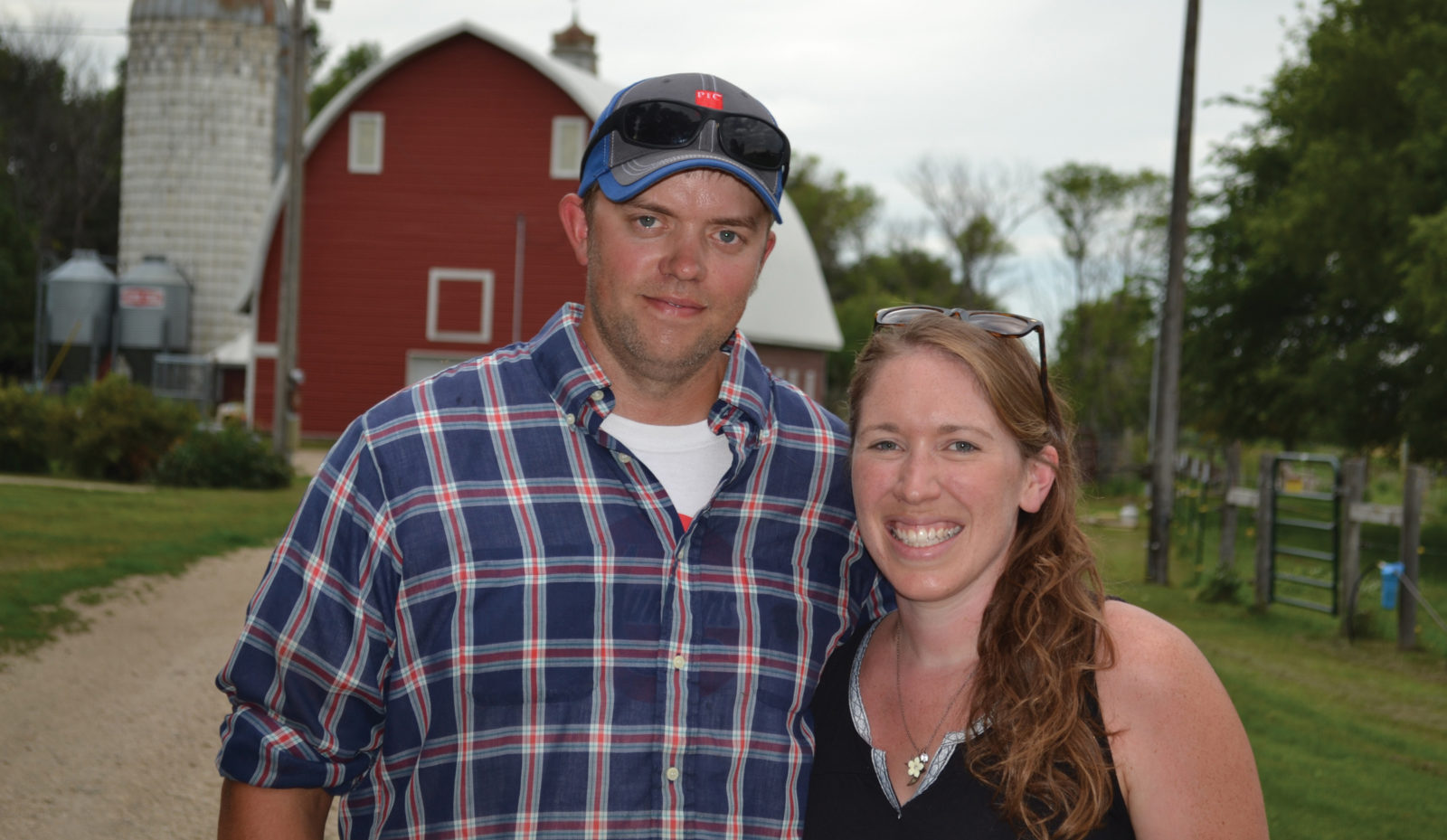 That’s why Ness, a Farm Beginnings organizer, has set up this field day with a “farmer-to-farmer” structure to it. In a way, it’s an extension of the way Farm Beginnings classes are designed, with farmers and other local agricultural professionals leading the sessions.

“At a typical field day you go to a farm where the owner is experienced and we’re there to learn from them about how they do everything,” says Ness.

Such field days have their merits, but at times they can stifle the generation of ideas from local farmers and others, some of whom may not have decades of farming under their belts, but have some good ideas to share nevertheless. Farm Beginnings field days often consist of inviting a couple of veteran farmers, but they don’t dominate the discussion.

“It isn’t just those experienced farmers with the answers—everybody else that shows up, they’ve got ideas, they’ve seen things,” says Ness. “We’re all just kind of brainstorming and thinking, ‘Well what are the options out here?’ ”

A Key Time
The Reddens, who are enrolled in LSP’s Journeyperson Course, have a lot on their plate now and during the next few years. Derek drives some 1,500 miles a week working as a regional field manager for a hog company. Carrie stays at home with their children. They moved onto this 320-acre farm three years ago after Derek’s grandmother moved off. The farm has been in the Luikens family (Derek’s maternal grandparents) since 1904, and since 1980 it had basically been rented out either for corn/soybeans or to the federal government through the Conservation Reserve Program. They have already put half the crop ground into grass and are raising chickens, turkeys and beef cattle on pasture for direct sales to consumers.

When the young couple first told family members that they were interested in making a living on the farm, the response wasn’t exactly positive. “They didn’t envision a strong likelihood of success for us as beginning farmers, and encouraged us to go down a different path,” says Carrie.

But eventually the Reddens were able to bring family around by talking about doing a different kind of agriculture than what dominates areas like this part of Minnesota—large cropping operations and massive CAFOs (one of the biggest dairies in the Midwest is a few miles from the Reddens’ farm).

“The lack of support from family members seeing us go into agriculture came from what most of the public sees as farming—huge farms, millions and millions of dollars in equipment, thousands of acres to manage,” says Derek. “And when we explained the type of agriculture that we were interested in and it wasn’t that, then they started to listen to what we had to say.”

As they explain at the start of the field day, the couple is in year one of a three-year transition to being certified organic. During the next two to three years they plan on building a lot of fence, constructing a dairy parlor and establishing a milking herd of 40 to 50 cows. While taking Farm Beginnings, dairy farming was the “last thing we said we wanted to do,” recalls Carrie. But it’s a kind of farming that provides a consistent paycheck, and right now there is a nationwide shortage of organic dairy products, which has kept the prices paid to farmers relatively high. In addition, Organic Valley, a major organic milk processor, already picks up milk from an experimental organic dairy herd at the University of Minnesota’s West Central Research and Outreach Center 15 miles away. That means a market is already on hand for any organic milk they can produce.

“People said the worst part about dairying is you have to be home all the time,” says Derek. “Well, being home sounds pretty good to me right now.”

A Brainstorming Session
During the field day, the Reddens talked about a major decision they need to make relatively soon: should they buy a certified organic dairy herd right off the bat, or transition conventional cows to organic? A discussion ensues: on the one hand having an organic herd right away means being able to benefit from premium milk prices, which is particularly important if feeding high priced organic feeds. On the other hand, certified organic milk cows are very hard to come by and are expensive. Brad Heins, a dairy scientist at the West Central Research and Outreach Center who works with the 170-cow organic dairy research herd, says one way to save money building the herd is to buy conventional, unbred heifers and transition them to organic over the next few years.

During the discussion about building a low-cost milking facility, Kent Solberg, a grass-based farmer who is the Reddens’ Journeyperson mentor, suggests a New Zealand style herringbone parlor.

“It’s the most labor efficient and cost effective,” says Solberg, who is also a livestock and grazing specialist with the Sustainable Farming Association of Minnesota.

The discussion turns to how to get on the milk truck hauling route, cattle breeds that do best on grass, ways to winter cattle outside, building soil health and transitioning feed crops like corn to organic production. On this last point, the Reddens are warned that going cold turkey on chemicals can be tricky. And it’s a good idea to find markets that pay premiums for crops that are in transition to being organic.

“Those transition years are tough—do your homework,” advises Susan Fitzgerald, who, along with her husband Mark, raises organic grains in nearby Hancock. “You want to build the soil and do that with diversity.”

“This was our best ground for producing corn and soybeans, so anybody we told that we wanted to graze it, thought we were crazy,” concedes Derek.

They planted the mix in April to provide grazing for their 13-cow beef herd and to build soil health in preparation for eventually establishing a permanent pasture. It’s waist high and threatening to get to the point where it won’t be palatable for the cattle. As the cows graze a part of the field that’s been penned off with portable fencing, the group talks about how many acres of grazing are needed per cow, ways of maintaining forage sources even through the hot summer months when cool season species go dormant and what to do when a cocktail mix like this gets ahead of the cattle’s ability to keep it grazed down. Several of the farmers make the point that even though the cattle are crushing many of the plants while grazing, it’s actually a good thing.

“A lot of people would call this waste, but it helps feed the soil microbes,” says Solberg. “And the only way to get that is with high-density, short-term grazing.”

After the field day, the Reddens are excited about all the information that’s been traded during the day. Derek says these kinds of discussions are part of their long term plan to take it slow and reduce risk.

“We’re hoping that the more planning that we do, and the more we talk to people, the more we can hear what mistakes they made, and we won’t have to make the mistakes on our own,” he says.

A field day like this also reinforces a goal Carrie has had since she took Farm Beginnings and started networking with area farmers and experts.

“I hope that 10 years from now we can come back and do another field day and that we can be the experts, that we can be the ones that are looking at the new farmers and saying, ‘You can do this. It’s not a pipe dream and we want to help you,’ ” she says as their guests continue talking farming methods while eating a picnic lunch. “I know that we are going to want to help as many beginning farmers as we are able to because of all the people that have helped us along the way.” 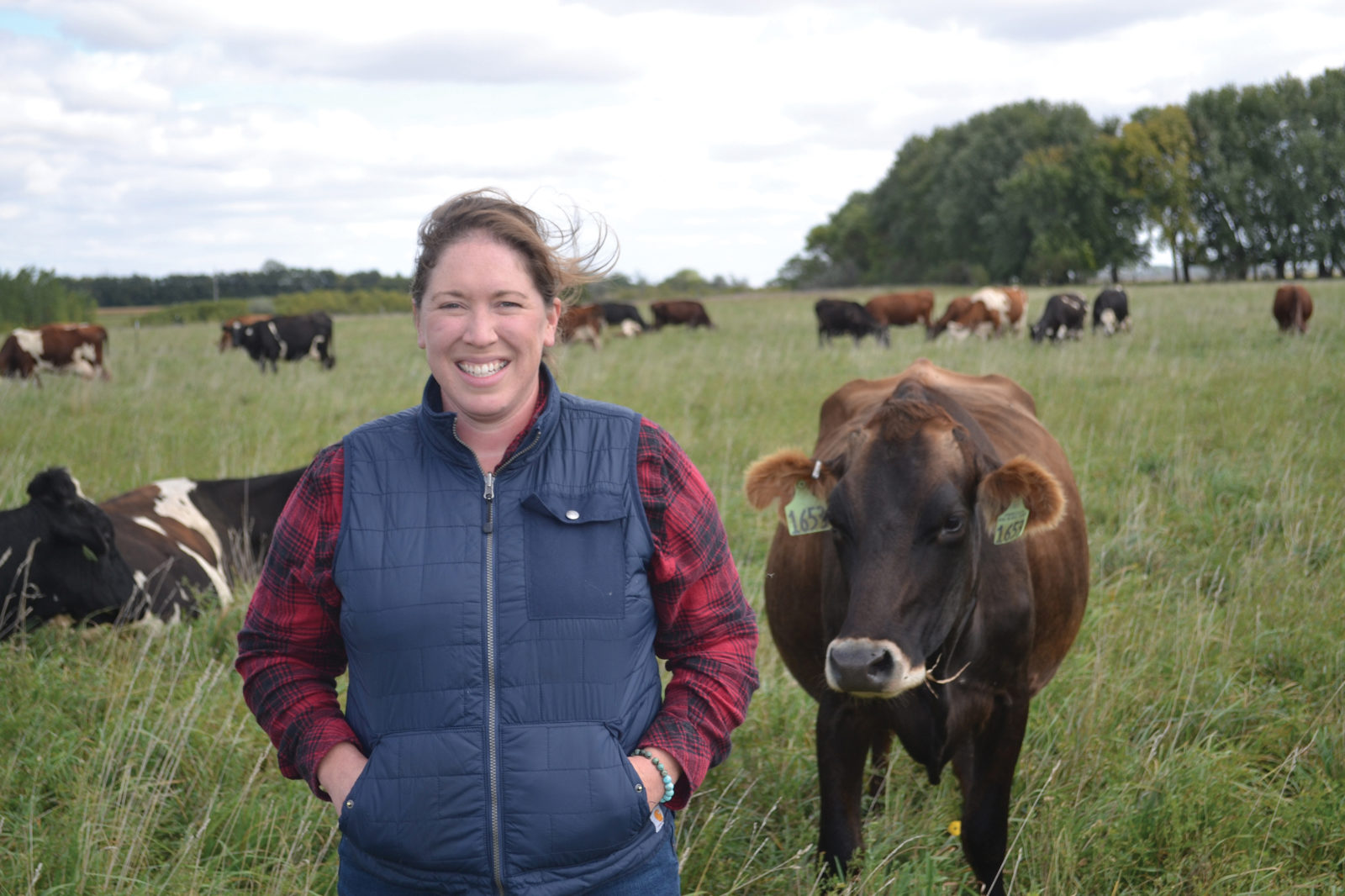 In episode 170 of LSP’s Ear to the Ground podcast, Richard Ness, along with Carrie and Derek Redden, discuss the role farmer-to-farmer learning plays during field days and workshops.

In episode 252, Carrie Redden talks about how she sees successful land stewardship and successful farming as deeply intertwined, and why more non-farmers need to make that connection as well.

Our current food system has decimated rural communities and confined the choices of urban consumers. Even while America continues to ramp up farm production to astounding levels, net farm income is now lower than at the onset of the Great Depression, and one out of every eight Americans faces hunger.

But a healthier and more equitable food system is possible. Come hear how grassroots food and farming leaders across the U.S. are tackling these challenges by building community food webs that strive for health, wealth, capacity, and connection.