Sometimes, there’s nothing like a speed bump to send you on your way toward that ultimate goal. In the case of Jason and Juli Montgomery-Riess, that slight detour was in the form of the Land Stewardship Project’s Farm Beginnings course.

Before taking the class, both had worked on some of the top produce operations in the region. The couple saved up money and their lives were so committed to a farming future that they delayed their wedding a week in the fall of 2009 so they could attend the first session of the Farm Beginnings class. Jason and Juli concede that up until then they were headed full bore into owning their own farming operation.

But when they gave their final Farm Beginnings class presentation in early 2010, they laid out a five-year plan that had one foot on the brake pedal: work on a few farms, buy a house in Minneapolis, start a family, sock away more money and in general put off buying a farm until they were good and ready. 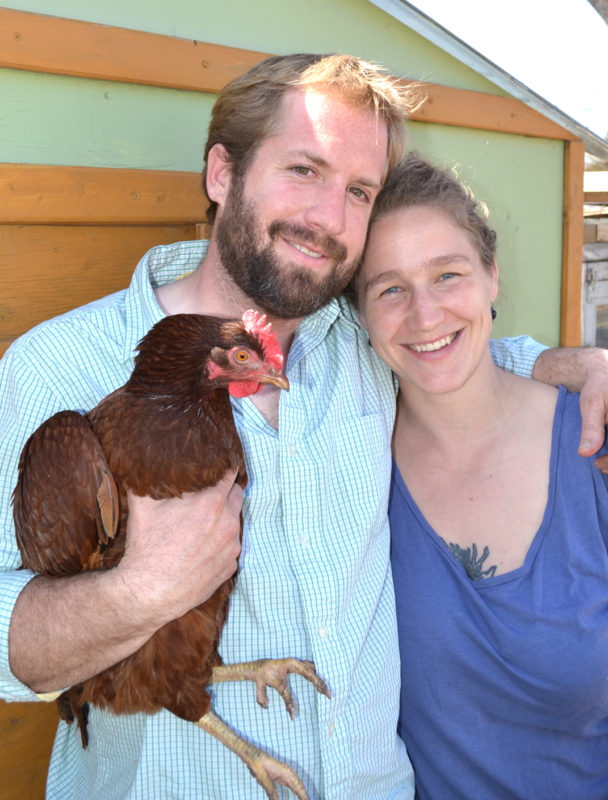 The reaction from their classmates wasn’t universally positive.

“A lot of our peers in the class were sort of shocked and almost frustrated with us. They were like, ‘You all should just do it, you’re ready,’ ” recalls Juli, 32, on a recent spring Saturday while sitting in the couple’s Minneapolis home. “And we did have a lot more practical experience than many of our cohorts, but the bottom line was we just didn’t feel right rushing into farming.”

Blame it on the farmers and other agriculture professionals who presented during the Farm Beginnings classes, which met twice a month during the fall and winter of 2009-2010. While making it clear that there were many opportunities in agriculture, particularly if one was willing to seek out alternative production and marketing systems and do good business planning, they also shared stories of what happens when one rushes in ill-prepared: financial ruin, unsustainable stress, even broken marriages.

“Trying to manage a new marriage, children and a business all at the same time seemed to be a lot to bite off at one time,” says Jason, 36. “Those farmers who spoke in the classes taught us to be deliberative. Farm Beginnings really slowed us down—in a good way.”

This from a guy who, after feasting on the writings of Wendell Berry and Michael Pollan while working as a librarian in Milwaukee, decided all of a sudden, “I had to do something.” In 2009, Jason quit his job and moved to western Wisconsin to get his hands dirty on a real farm.

“Just like that,” recalls the California native with a tinge of amazement in his voice.

Juli was from the Twin Cities and had organized around tenants’ rights issues in California before returning to the Midwest to pursue her own farming dream. In 2009 the two met while they were both working on Foxtail Farm, a Community Supported Agriculture (CSA) operation near Osceola, Wis. (Juli had also worked on Burning River, another CSA in the area, and Jason had volunteered at Growing Power, an urban farming operation in Milwaukee. He also worked at Gale Woods Farm in Minnetrista, Minn.). The pair hit it off and within a few months Jason was ready to pop the big question: “I said to Juli, ‘Do you want to farm together?’ ”

“When he asked if I wanted to farm together I said, ‘Do you realize what you’re asking me?’ ” Juli recalls with a laugh.

They were married in October of that year on Foxtail, a symbolic gesture of just how much agriculture was to be intertwined with their relationship. But a week before the wedding, they sat in their first Farm Beginnings class, beginning that more “deliberative” stage of their farming dream. The Farm Beginnings course, which LSP has been offering since 1997, has become a national model for providing wannabe farmers with training in innovative business planning, marketing and goal-setting, among other things. Farm Beginnings is also known for its use of established farmers and other agricultural professionals as class instructors.

It was through those farmer-presenters that Jason and Juli got the message that it was fine to be fired up about a farming career, but allowing that passion to serve as an unguided accelerant can leave one burned out. They both say that before taking the class, they were committed to not allowing lack of money to get in the way of launching their own farming operation.

“But we learned that making mistakes can cost a significant amount of money,” Juli says, conceding that she was initially slightly jealous of her classmates who already had access to farmland. “But even having land was no guarantee of success. People were losing their marriages over their differences as they farm together. And so there were many voices saying just make sure that you keep coming back to your values and checking in with each other. That planning piece was really important to me.”

Jason says Farm Beginnings made it clear to them that there were a lot of business-related aspects to production agriculture they hadn’t given deep thought to before.

“It wasn’t just knowing how to put seeds in the soil and plant them out in the field and pick them and deliver them,” he says. “There were a lot of business dimensions, and there was a quality of life dimension to this work we wanted to get right.”

Striking a Balance
Make no mistake, that speed bump hasn’t brought about a full stop—it’s more like a pacesetter. The couple is very much still immersed in activities that they hope will contribute to their ultimate goal: owning and operating a vegetable operation. Jason is in his second year working as a grower at Wozupi, a farm operation owned and operated by the Shakopee Mdewakanton Sioux Community in nearby Prior Lake.

The operation consists of a 100-member CSA enterprise with a twist: members of the tribe are given the first opportunity to join Wozupi in a “Tribally Supported Agriculture” arrangement to improve health in the community while helping tribal members get more connected to the land. Wozupi also has an orchard, raises chickens, has 120 honeybee hives, preserves heritage seeds and provides classes on food production and preservation. Wozupi markets produce not only through the CSA enterprise, but to farmers’ markets and Mazopiya, a natural food market owned by the tribe. Jason says working at Wozupi has been a tremendous help in staying on the road toward a farming career while garnering some economic security and having time to start a family—their daughter, Alma, is 1, and son, Walter, is 2. Since the garden operation is one “department” in the larger Mdewakanton Sioux Community, Jason works a 40-hour week year-round and gets health benefits, as well as access to regular equipment maintenance.

“You have the resources of the community and of the tribe to make this garden work. I’m getting to practice agriculture and hone my skills while being held responsible for providing an excellent product to customers,” he says, adding that the one down side is that it can often be a challenge squeezing all the farm work that needs to be done into a regular work week.

Juli is working as a school counselor in Minneapolis, and tries to tie that in with farming and food production as well. She has taken sixth grade students out to Gale Woods for a tour. “It’s a beautiful thing to see a kid hold a lamb,” she says. One of Juli’s goals is to find a way to combine her passion for social justice and farming.

The couple is also staying in close contact with Paul and Chris Burkhouse, the farmers at Foxtail, who they see as mentors. And they are part of an informal group of other beginning farmers who live in the Twin Cities. Some are farming in urban areas, others are, like the Montgomery-Riesses, working toward a time when they can move onto their own operation in a rural community. Jason and Juli are waiting for their kids to grow a little bigger, for their financial situation to improve and their farming skills to sharpen. They are also waiting for something that’s pretty much out of their control.

“I’m hoping land prices will fall for our sake,” says Juli, as chickens in their backyard coop make soft cackling sounds, a reminder of another way the couple is keeping connected to farming here in the city.

Their goal is to have a produce operation that markets either through CSA or wholesale markets, or a combination of both. One idea they throw around is a CSA model that combines the production of several farms.

One way or the other, farming is in the future—even when they take steps that to an outsider may seem to be a one-way detour, like when they bought their house in the city in 2010.

“People said, ‘I thought you were going to buy a farm?’ And I say, ‘This is part of the path,’ ” says Jason, explaining that owning property seems like a better way of holding some of their savings at this time. “What appears to some people as a distraction is part of a deliberate plan for us and our future in farming.”