When a new food and farming model is introduced to a region, it can be slow to catch on—if at all. On the other hand, sometimes a new concept takes off like a galloping horse, challenging its practitioners to hang on for the ride. One Saturday last October, Kristianna Gehant and Nick Siddens were on their knees, pressing garlic bulbs into the rich glacial till soil of their northeastern South Dakota farm. Five years ago, they jumped off a bucking bronco, and this is where they landed.

“We may have been heading towards burnout if we hadn’t of changed,” says Kristianna, 36. “We just needed to pull on the reins a little bit.”

The frisky pony in question was Community Supported Agriculture (CSA), a system where farmers sell shares in their farm before the growing season, and in return make a weekly delivery of produce to the “members” of their operation. When the couple launched a CSA produce enterprise on Prairie Coteau Farm in 2004, the concept was so new in the region that “people thought we had invented the concept,” recalls Kristianna.

That first season for Prairie Coteau started out in relatively humble fashion: they sold 12 subscriptions, mostly as half-shares. Then, as the word got out, things moved from a trot to a gallop. The next year they more than doubled their shareholders. By 2007 they had 42. Nick’s full-time job with a wind energy company kept him on the road for days at a time. So when they were doing the CSA enterprise, Kristianna was doing most of the farm work during the week. On the weekends they drove to Sioux Falls 90 miles away to sell produce at a farmers’ market. Kristianna and Nick began looking at the numbers and realized that they would need 100 to 120 CSA members to make the farm a full-time endeavor for both of them. 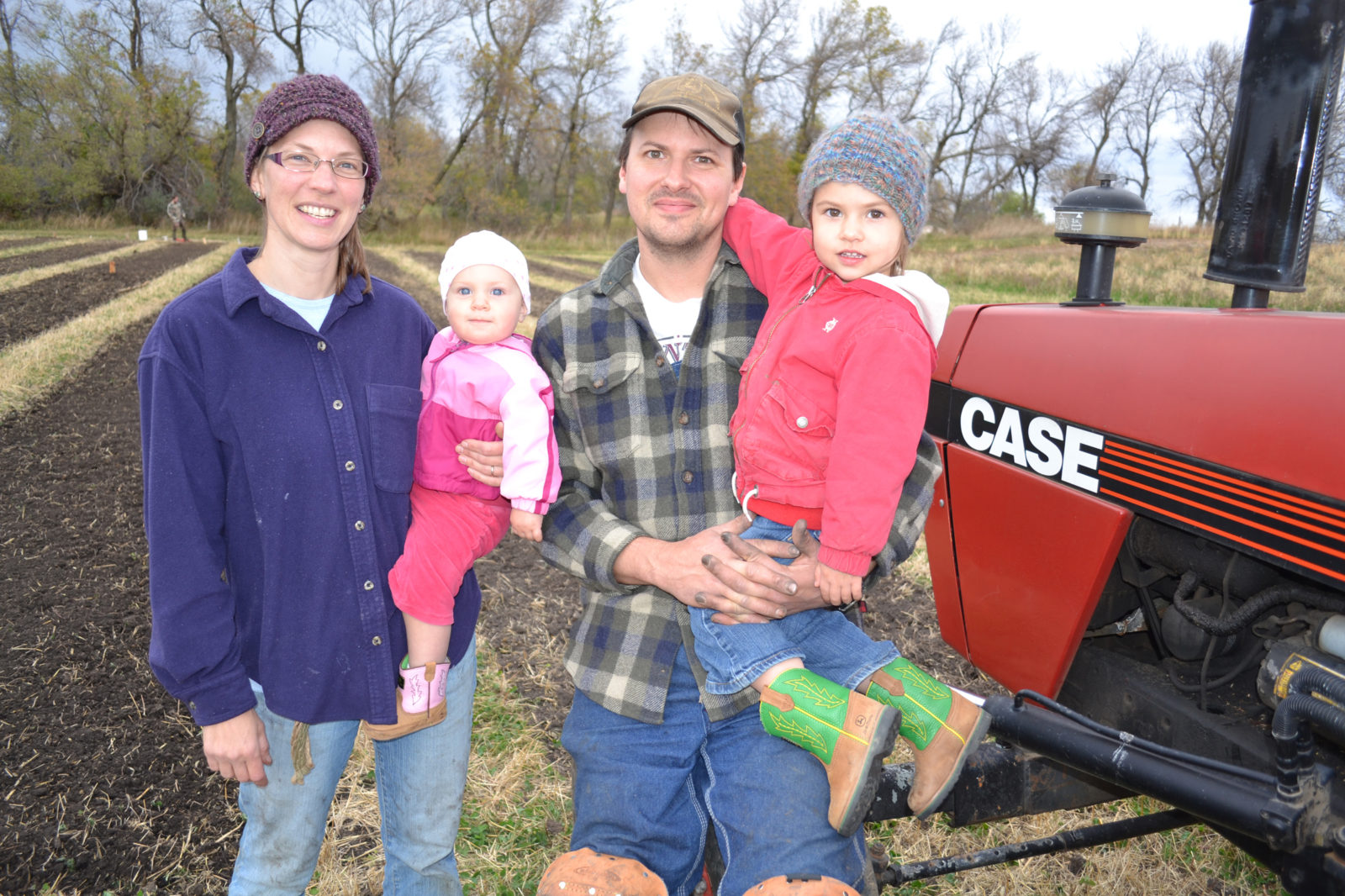 Kristianna Gehant and Nick Siddens, with their children, Georgia and Luna.

They were concerned that such growth at that time would throw a roadblock in front of some major life goals, number one being starting a family.

“We were going with the flow and I think we could have gotten up to those numbers, but it would have required risking being unhappy about sacrificing things like starting a family,” says Nick, 33. “We wanted to re-evaluate where we were at so we could redirect and make it work together.”

What they needed, the couple decided, were the tools to execute the kind of planning they’d neglected to do before jumping into CSA farming. So after the 2007 season they ended the CSA enterprise, and that fall and winter Kristianna took the Land Stewardship Project’s Farm Beginnings course. Twice a month she traveled to Marshall in southwest Minnesota to participate in classes taught by farmers and other ag professionals from the community. The course focused on goal setting, business planning and innovative marketing.

Garlic production has allowed the couple to focus on managing the farm as a whole and make plans for the future.

Farm Beginnings Dakota Style
Kristianna had ulterior motives for taking the class. She serves on the leadership team of Dakota Rural Action, a nonprofit family farm organization based in Brookings. A few years ago, DRA’s staff and members began discussing the possibility of teaching the Farm Beginnings course in South Dakota. Kristianna wanted to get a firsthand look at the course to see if it could be adapted for use across the border.

Her time in the program was well spent. Kristianna reported back to DRA that the course’s emphasis on whole farm planning and financial management would be a good fit for South Dakotans seeking to start farming or make changes in their current operations. Dakota Rural Action is now in the midst of its third year of offering the Farm Beginnings course to people representing a variety of ages, agricultural experiences and goals.

“I think what Farm Beginnings has done in South Dakota is unearth all the people who are interested in small scale and sustainable agriculture and put them in touch with each other,” says Kristianna, who has led class sessions.

The course paid off personally as well.

Kristianna didn’t grow up on a farm and has a degree in history and women’s studies from St. Olaf College. She worked on agroforestry projects as a Peace Corps volunteer in Mauritania and was introduced to CSA farming while interning on an operation in northern Illinois. Kristianna concedes that experience prompted her to “fall in love” with the whole concept of raising a family on a small working farm.

“I think there was a great deal of idealism involved—feeling like this was something very positive to do for the earth, for our family, for myself and other people,” she says.

Farm Beginnings provided the opportunity to step back and take a look at how to proceed with a farming career from a more practical point of view.

“Farm Beginnings helped us figure out what we want out of farming and our quality of life in general,” Kristianna says, adding that one of the most valuable outcomes of the course is that she and Nick were prompted to write down their long-term plans. “It made us consider what the other was thinking and see where we agreed and where we didn’t. We were actually pretty much on the same page.”

One doesn’t have time for that sort of reflection while seated on a galloping horse. One thing the couple agreed upon was that running a CSA given their current situation and goals was probably not the best fit.

Nick grew up on an Illinois dairy farm and concedes he “was not a model farm child in any way.”

“I think I spent my entire high school career trying to learn as little as possible about farming,” he says with a laugh.

He eventually got a degree in natural resource and environmental science from the University of Illinois and sees himself continuing in his current position with a wind energy company for several years to come. However, Nick would like to eventually build their farm into an operation that can provide a full-time income for both he and Kristianna.

The couple has developed an overall goal of managing the 40 acres as a whole and integrating income-generating crop fields with habitat such as prairie and trees. They would also like to eventually bring livestock onto the farm to help cycle nutrients into the soil while controlling weeds and adding economic value to grass and hay.

“Vegetable farming is all-consuming and you get stuck on those two acres,” says Nick. “It’s tough to look up and manage the rest of the farm.”

Narrower Focus = Wider View
After ending the CSA operation, Kristianna and Nick decided to focus on raising garlic, a crop that had always done well on their farm. They grow anywhere from eight to 12 varieties of garlic, mostly as seed stock that’s shipped all over the country. They acquired organic certification in 2010, and their customers come mostly through their website (www.prairiegarlic.com) and contacts through the Garlic Seed Foundation.

During the fall, Kristianna and Nick spend a lot of time making shipments containing anywhere from a pound to 200 pounds of seed garlic. In 2011 they grew a little less than an acre of garlic, which produced around 1,300 pounds.

As they plant a Russian Giant variety of garlic on this particular October day with the help of a friend, Clark Young, Kristianna and Nick discuss the advantages of focusing on one enterprise for now. Unlike vegetables, garlic can be stored and shipped relatively easily using services like UPS, which is particularly important given the distance between their farm and major markets. And during the growing season it doesn’t require the daily, intensive management that produce does.

“We can do it as a team,” says Kristianna. “There are some labor-intensive times, but not every week. You plant it in October, then mulch it, remove the scapes in June and harvest it in July.”

But focusing on one enterprise isn’t getting in the way of moving forward with other plans for managing the farm as a whole. Nick and Kristianna have established native prairie grass on a small hillock to control erosion, and are working with a friend who is a permaculture expert to revitalize a grove.

Once their young daughters—Georgia, 1; and Luna, 3—are old enough to attend school, Kristianna and Nick will consider expanding the garlic enterprise and perhaps getting back into vegetable production.

In a sense, the fact that Farm Beginnings has helped nurture a growing local foods/sustainable agriculture movement in South Dakota takes a bit of the pressure off the couple. Kristianna says part of the reason things got a little out of hand half-a-dozen years ago was that there was the feeling Prairie Coteau offered one of very few options in the area as far as local, sustainable food. Now that it’s become clear there are other farms in the region doing this sort of thing, Nick and Kristianna don’t feel they have to do it all—they can pick their niche.

“We can step back a little,” says Kristianna as night falls and she and Nick walk the kids from the garlic patch to the house. “We can say, ‘Okay, it’s great there’s all this interest in local foods and CSAs, but our place in all this can be a little bit different.’ ”

In episode 113 of LSP’s Ear to the Ground podcast, Kristianna Gehant and Nick Siddens talk about their decision to shift gears.