In 2005, Sara Morrison was driving home to Minnesota after spending a few long days at a Saint Louis horse show. Traveling, often with a horse trailer in tow, was nothing new to her. Since getting a degree in equine science eight years before, Morrison had spent much of her life on the road, preparing and showing other people’s horses.

“I’m the girl that’s up at 5 a.m., preparing the horses,” she says. “It’s not a bad way to live for awhile and I thought I was going to spend the rest of my life on the back of a horse.”

But that fateful trip gave Morrison plenty of opportunity to re-consider. A blizzard was raging and her vision was partially obscured by a black eye that had resulted from a wayward bungee chord. A drive that should have taken 11 hours clocked in at double that.

“After that trip I just thought, ‘Sara, you’re smarter than this.’ ” 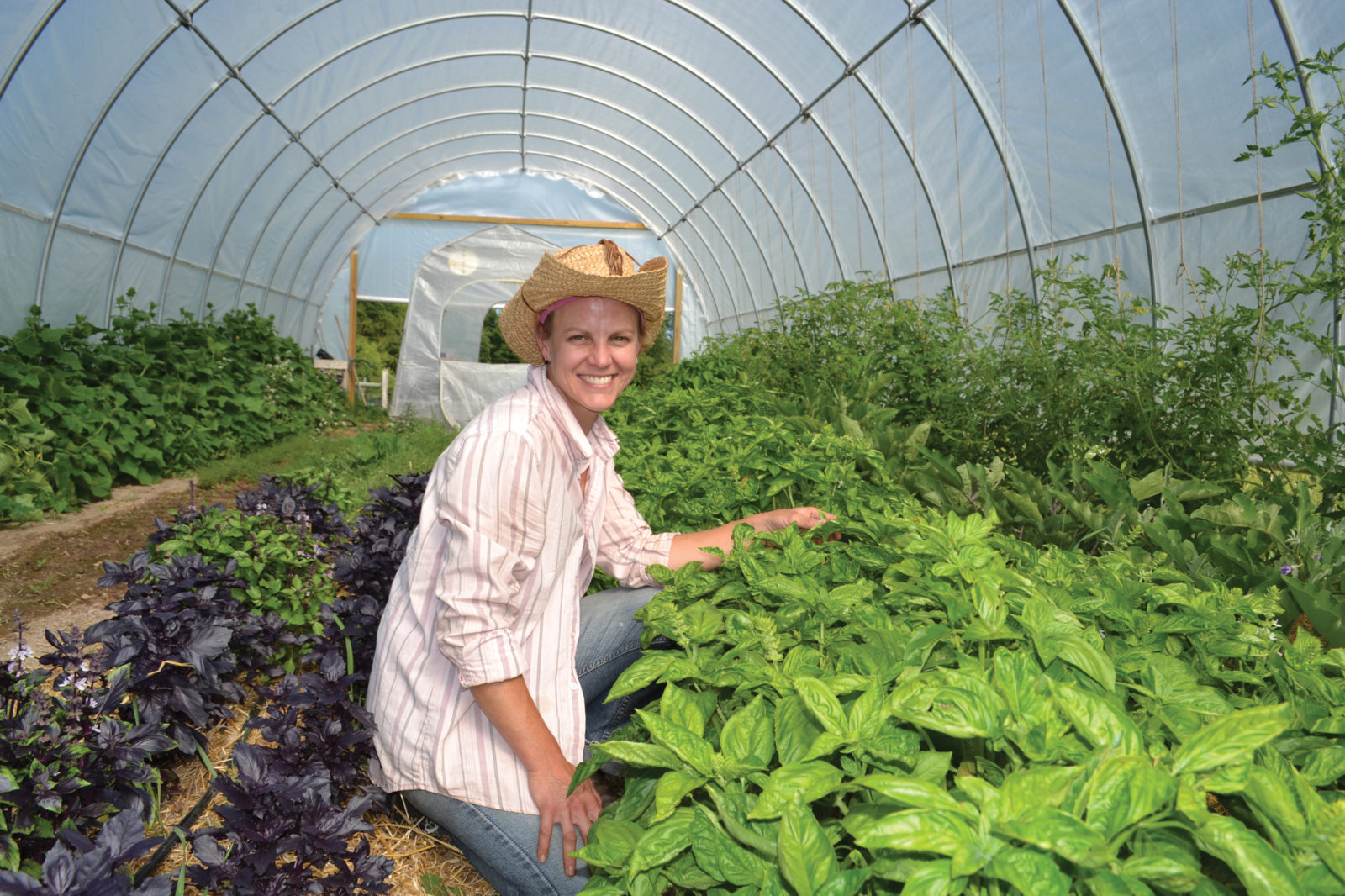 She describes that epiphany on a day in late July while giving a tour of the small vegetable enterprise she owns and operates near River Falls in western Wisconsin. The operation is another step in a journey that Morrison began during that harrowing winter drive. She realized while taking care of other people’s horses that ultimately she wanted to own and operate her own business. Morrison maintained that goal in subsequent years while working as a co-op produce manager, gardening consultant and customer service representative for a software company.

In recent years, the 40-year-old has taken several serious steps toward, as she puts it, “playing in my own dirt”— in other words, finally becoming a self-employed entrepreneur. She’s garnered plenty of experience raising and marketing vegetables, and gotten some solid grounding in business planning and goal-setting through the Land Stewardship Project’s Farm Beginnings and Journeyperson courses. She has also attended field days around the region, observing firsthand everything from wholesale vegetable production to grass-based livestock farming.

“I love learning,” says Morrison. “I love sitting in a room and trying to figure out what I want to do with my life.”

But these days she’s doing most of that learning on the land itself, as her business, The Backyard Grocery (www.thebackyardgrocery.com), wraps up its fourth season as a Community Supported Agriculture (CSA) farm and Morrison considers how best to make use of the 15 acres she bought in 2013.

Piano Lessons
After leaving the horse business, Morrison bought a house in Bayport, Minn., near the Twin Cities on the Saint Croix River. She began working at the River Market Community Co-op in nearby Stillwater as a produce manager, mostly “learning on the job,” as she puts it. At about that time, Morrison started a garden in her backyard and her mother, Lois, bought a former dairy farm in Grantsburg, Wis., 50 miles away.

The combination of gardening, being involved with the River Market and raising vegetables on a larger scale at her mother’s farm got Morrison excited about producing food for a living. It also made her aware that plenty of other people had that interest, if not the skills and knowledge. Through her connections in the local food community, it became clear to Morrison there was a niche opportunity: people were willing to pay to have someone mentor them in gardening. Thus was born the first, “mobile” iteration of The Backyard Grocery.

The business consisted of meeting with clients in the spring, establishing their gardens, and then visiting regularly throughout the growing season to provide guidance.

“I would come every week like piano lessons and say, ‘This is a weed and this is a vegetable,’ ” recalls Morrison.

She enjoyed the experience and ran the business for four years, having 30 clients at her peak—it was a mix of single people, retirees and families. But Morrison eventually decided she wanted to be rooted on her own plot of land.

“If I was going to go fulltime from weedy patch to weedy patch all season long, I thought it might as well be my own weedy patch instead of everybody else’s weedy patch,” she says.

Crazy Talk
The original idea was to go into wholesale vegetable production on the land owned by Lois, who is a certified Master Gardener. But it eventually became clear that commuter farming on that scale wasn’t going to work for Sara—she wanted something closer to the markets she was familiar with in the Saint Croix River Valley. But she also needed some help in networking with other farmers and figuring out how to do the kind of holistic planning needed to get serious about food production.

So during the winter of 2009-2010, Morrison and her mother took LSP’s Farm Beginnings course. During the class they learned about business planning, decision making and goal setting, and networked with established farmers in the area.

“Our position to this day is every high school student should take Farm Beginnings because it helps you figure out what you want to do in life,” says Morrison. “There’s no class in school called decision making.”

During this period, Morrison also worked in customer support for a software company. It was a job she didn’t particularly enjoy, but it offered up a bit of serendipity that led her further down the road toward achieving her farming dream. Both during Farm Beginnings and later when she took the follow-up Journeyperson Course, Morrison’s mentors were Chris and Paul Burkhouse, who run Foxtail Farm, a winter CSA in nearby Osceola, Wis.

She was impressed by Foxtail’s success, but intimidated by the idea of having a core of farm members reliant on her for regular deliveries

“I never wanted to be a CSA farmer,” says Morrison. “The whole idea of having CSA production ready each week on time was crazy talk.”

But eventually that crazy talk drowned out the “saner” discussions going on in Morrison’s head. While flying back from a computer software trade show in 2012, she met a man who had 110 acres of land near her home in Bayport and was willing to let her raise vegetables on one corner of it. That first year she raised enough for 10 CSA shares on a quarter of an acre. In 2013, she farmed three-quarters of an acre on another friend’s property.

Also in 2013, Morrison bought 15 acres near River Falls, providing a permanent home for The Backyard Grocery. Morrison says in a lot of ways the farm fits her skills and needs well. She’s a self-professed “non-builder” and needed a place with facilities that could serve as a packing shed and tool storage. The farm she landed on not only has a small barn, but a Quonset building. In addition, if Morrison eventually decides to transition to certified organic, the property is safe from spray drift: it sits on a designated “Wisconsin Rustic Road” that’s protected from major development, and 150 acres of land north of her farm is in a conservation easement. Two other sides of the property are bordered by pine trees.

The 2014 CSA farming season for the newly transplanted Backyard Grocery was a real struggle, with frequent floods undermining production. This is where the connections Morrison has made through Farm Beginnings and Journeyperson paid off. She recalls one particular stressful period when she contacted LSP Farm Beginnings organizer Dori Eder and said she wanted to sell the land and give up her farming dream.

Eder texted back: “Put on a pair of pantyhose and spend a day under fluorescent lights, and you’ll think differently.”

“That was the year where I wondered if it was the time to get out,” admits Morrison. “This year it’s the reverse: I can barely get the boxes closed.”

During the 2015 growing season, The Backyard Grocery consisted of a small CSA (14 shares), vegetables produced for canning that are sold at a local farmers’ market, and sales to restaurants in Bayport and Stillwater, as well as food co-ops in River Falls and Stillwater.

It also has a few acres of pasture, and Morrison has recently added four Galloway cow-calf pairs to the farm. She’s rotationally grazing them and considering just how deep to go into the grass-based beef business. It may be one way to make a farm that is a very part-time endeavor into more of a self-supporting business.

Cattle are different from horses, and pursuing the beef business will mean attending more field days and seeking out further advice about such things as animal husbandry and pasture management. That’s fine, but Morrison concedes that even her own love of learning has its limits.

“I would like to feel like I’m not always just starting out,” she says as a family stops by to pick up their CSA share for the week.

No Stockings & Bad Lighting
One goal is to figure out how to do farming in a less labor-intensive manner, something she dreams about while bent over picking beans on a summer day. One idea is to focus on more year-round production utilizing season extending hoop houses and root cellar storage.

“As I get older, I can pick beans for an hour, and then not pick beans for 20 minutes. So I’d like to smooth out my work load,” says Morrison. “More herbs, greens, things like that, instead of watermelons, squash and potatoes.”

As she wraps up the 2015 growing season and looks ahead to 2016, Morrison says she will rely on the network she’s developed through Farm Beginnings and Journeyperson more than ever. The phone calls, e-mails, informal conversations and on-farm workshops made available through these initiatives has given her the confidence to keep saddling up, even when the riding gets rough.

“Without these programs, I don’t know where I’d be,” she says, pausing a moment before answering her own question. “Probably wearing pantyhose and sitting under fluorescent lights.”

In episode 172 of LSP’s Ear to the Ground podcast, Sara Morrison talks about The Backyard Grocery, Farm Beginnings, Journeyperson and, of course, which is harder—showing horses or farming.

LSP will hold a Grazing Group Pasture Walk at Oak Creek Pastures in Ossian, Iowa. Sign-in for this free event begins at 4:45 p.m. Supper will be provided; suggested $3-$5 meal contribution.

Scott & Amanda Holthaus of Oak Creek Pastures are hosting a pasture walk for area graziers to show cattle grazing on crop-ground planted last fall to a diverse winter cover mix (rye, vetch, triticale, winter barley) and results of winter bale grazing on permanent pasture. There will be a discussion around fencing and watering considerations for maximizing grazing days.

Join the Land Stewardship Project on Friday, May 20, from noon-1 p.m., for a virtual conversation with other retiring farmers and non-operating landowners to discuss how federal policy could better support your efforts to build a more just and resilient agricultural system. To register, click here.

Get to know other farmers and learn about conservation programs while enjoying a build-your-own taco bar with locally grown foods and ice cream served by the Winona County Dairy Princess. After supper, area farmer and soil conservationist Martin Larsen will share his experiences caving below the farm fields of southeastern Minnesota. Reserve a spot for this free Friends of Whitewater State Park event by e-mailing sara.holger@state.mn.us or calling 507-312-2308.

The Land Stewardship Project will be holding an in-person listening session on regional food systems in Montevideo, Minn. Register here.