Calling all microbe enthusiasts! Looking to learn about better composting methods that encourage the soil biome to thrive, all with minimal effort? Then you may be interested in research the Land Stewardship Project and some of our farmer-members are doing on the “Johnson-Su Composting Bioreactor.”

Developed by molecular biologist and research scientist David Johnson, along with his wife Hui-Chun Su, this system is based on a static aerobic (compost that is not turned and air exchanges evenly throughout the pile) type of composting that takes place in a simple, stack-like structure for 12-18 months. Aeration is provided by a series of pre-set ventilation shafts. One of the benefits of the Johnson-Su Bioreactor is that it is quite scalable — it can be set up in a small space and constructed for under $50. Unlike large-scale windrow composting systems, it does not require a large compost turner or other specialty equipment, and very little labor is required once the system gets going. In other words, this system can be set up in a backyard or on a 1,000-acre farm! 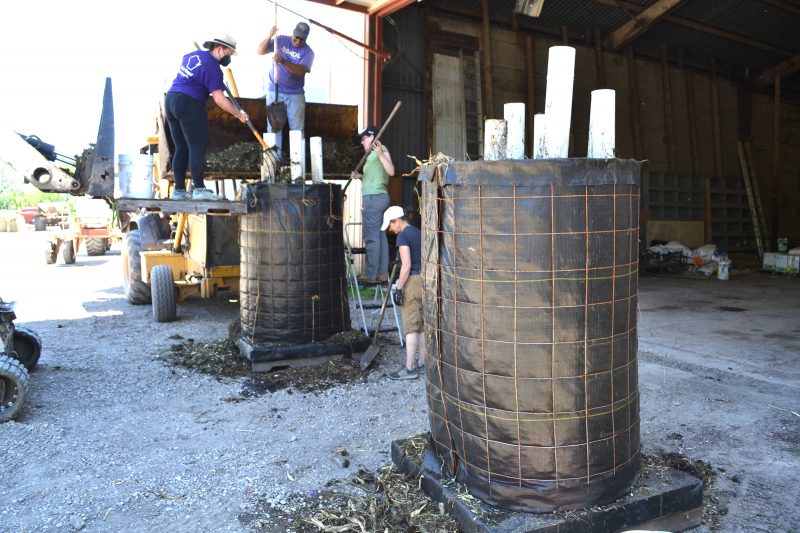 In June 2021, material was loaded into Johnson-Su Bioreactor stacks at the Tom and Alma Cotter farm near Austin, Minn.

Like no-till, the Johnson-Su method models a “minimal disturbance” approach — as in you do not need to turn the material to help it break down. This lack of disturbance allows fungi networks to form, create symbiosis, and maintain a healthy community. Typical large-scale commercial windrow-based composting processes are often designed and operated for speed and maximum product flow, which can result in a product that’s not as “mature” and full of complex fungal communities.

Johnson-Su compost is different — mature compost has complex fungal communities and a balance of healthy bacteria, nematodes, and worms that can be used as potting soil and made into a “tea” to apply on row crops. The compost or tea acts as inoculant for the soil and is best applied with a cash crop or cover crop. Research shows that such an inoculant can produce multiple benefits in crop fields.

Inspired by the work of microbiologist Elaine Ingham, in recent years farmers and others have been investigating how they can use composting to build the kind of soil biome that is self-sustaining and not reliant on a constant supply of chemical inputs. Based on this growing interest in putting all those soil microbes to work, during the summer of 2021 LSP staff worked with five farmers — four in Minnesota and one in Wisconsin — to build and fill the first year’s trial of Johnson-Su Bioreactors. LSP received a grant through the Minnesota Department of Agriculture’s Agricultural Growth, Research, and Innovation Program to conduct the first replicated on-farm trial of the Johnson-Su composting method.

The bioreactor stacks LSP has set up on the five farms are constructed of wire mesh, landscape fabric, and PVC piping. They are approximately five-feet high and 12 and-a-half feet around. Two of the farms involved are vegetable operations, one is an organic dairy, and the other two are crop-livestock enterprises.

The goal of this project is to study different recipes that consist of materials which are available on farms right here in the Upper Midwest. The original recipe developed by Johnson and Su in New Mexico is composed of one-third leaf litter, one-third dried cow manure, and one-third wood chips. Our farmer-members tried to create recipes with a similar carbon-to-nitrogen ratio. Some farmer recipes utilized different bed packs, hay, straw, animal manure, and old potting soil. A key component of the bioreactor management is moisture control — the material needs to be soaked before it’s added to the reactors (this became a learned lesson in year one).

Each farm has two bioreactors, with each unit testing different recipes, and the stack structures are being housed in locations that generally stay above freezing to prevent die off of the worms that are added after an initial period of high heat — called a thermophilic phase — is over (this high heat period helps kill harmful organisms that may be present in the source material). We are comparing Johnson-Su compost to conventional, commercially processed compost from three facilities to gauge how to stands up in terms of composition and microbial make up. We will continue the work into 2022 and will report our findings in 2023.

Liana Nichols, who works for Wozupi Tribal Gardens, is one of the farmers participating in this research project. She’s excited about the potential for making the vegetable enterprise’s soil more self-reliant through biological activity.

“I see the potential for relying less on off-farm inputs such as purchased fertilizer and potting soil, and it’s just plain exciting to learn more about the tiny life forms underground that are so essential to nutrient cycling and healthy ecosystems,” Nichols told me. “We are transitioning toward a mulch-based, very minimal tillage system with the intention of reducing our weeding workload and protecting our soils. Having the ability to produce microbially diverse compost on-farm is a great next step to ensuring that we have a diverse and functional population of underground life in our vegetable beds.”

Nichols likes that this form of composting is doable on any size farm and that it doesn’t require handling a  lot of material. “Since we transplant so many of our crops, I am hopeful that we can use our compost as potting soil so that our transplants could go out into the field inoculated with a diversity of microbes,” she said.

Bioreactor samples from participating farms have already been taken and sent to our compost consultant, Maks Sandor Kopish, who is photographing the material under a microscope. Samples have also been sent to Soil Food Web Inc. and more samples are being sent to the genomics laboratory at the University of Minnesota  to analyze the species present in each reactor.

Sandor Kopish is impressed with the samples that have been submitted thus far. 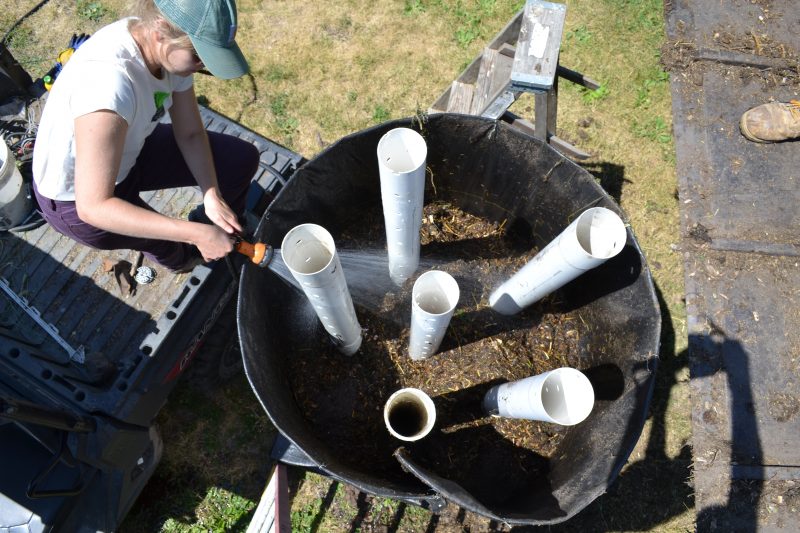 Watering a Johnson-Su Bioreactor stack on the Ruth and Jon Jovaag farm near Austin, Minn.

“All appeared to have sufficient oxygen to select for good aerobic organisms over anaerobic ones,” the consultant says. “I saw lots of good fungi, tons of testate amoebae, some nematodes, and many interesting things I couldn’t identify.

There is some concern that during the thermophilic phase high enough temperatures were not achieved to be effective at killing harmful organisms.

“While it’s definitely ideal for the material to go through this hot phase, the bioreactors are unique in that they can function equally well as a cold pile due to their long maturation period and the addition of composting worms,” says Sando Kopish. “Weed seeds typically rot or get consumed over the year-long process and pathogens are easily outnumbered by beneficial decomposing organisms, especially due to the good bacteria and fungi in the gut of the worms which inoculate all of the material that passes through.”

In coming months, check our Microbiology web page for updates on this exciting research. For more information, check out the list of resources below.

More on the Johnson-Su Bioreactor

• Ear to the Ground Podcast No. 266: Activating Soil Life

• An LSP Slideshow on Johnson-Su Bioreactor Construction in Minnesota

• How to Build Your Own Bioreactor