When one sees the word “unambiguously” used in a carefully researched academic paper, it’s time to take notice. For example,  a recent Journal of Policy Modeling study reports results that are “…unambiguously suggestive of a crop insurance policy regime that is biased in the direction of increasing consolidation in crop farming….” That conclusion is based on an analysis done by the researchers, two of whom are agricultural economists at the University of Nebraska, of 426 counties from five corn and soybean producing states: Minnesota, Iowa, Nebraska, Illinois, and Indiana. The study, which covers the crop years 1992 to 2012, makes one thing crystal clear, according to the authors: “…subsidized crop insurance can only accelerate the trend toward further consolidation with consequences for sustainability and depopulation of rural communities.” 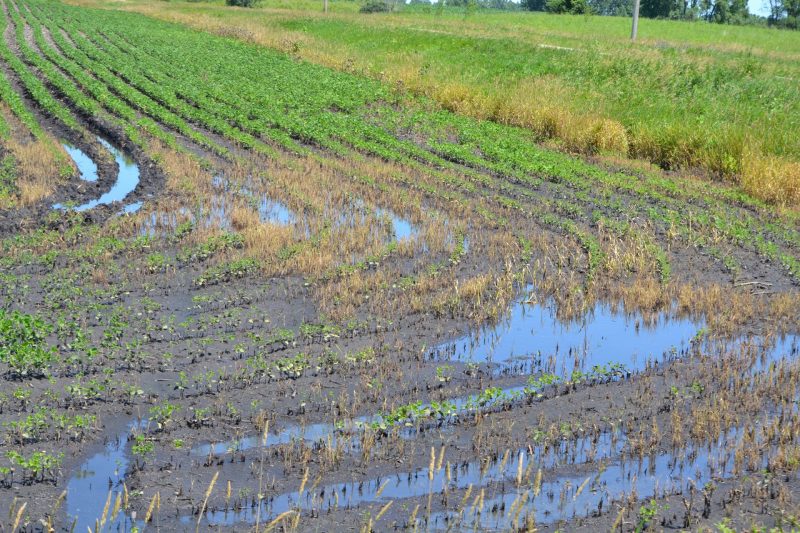 Rough translation: there is little doubt our country’s biggest tax-funded ag safety net program is destroying farmers and the rural communities that rely on them, which is polar opposite of what its creators had in mind over 80 years ago. Compound that with the fact that it’s long been known the current crop insurance program encourages an environmentally harmful duo-culture of corn and soybeans, and the argument for major reform is more powerful than ever.

This research is one of the first to ask a blunt question: Does subsidized crop insurance affect farm industry structure? The answer is yes, and mostly in a negative way. This falls in line with other research that shows how, in general, our agricultural subsidy system benefits the biggest, most well-financed players to the detriment of everyone else. This latest study puts hard numbers to what Land Stewardship Project farmer-members have been reporting over the years: the way federal crop insurance is implemented is having major unintended consequences.

The Nebraska research, which takes into account other factors that might affect consolidation such as technological advances, points out that the negative effects of crop insurance became particularly evident after 2000, when the Agricultural Risk Protection Act (ARPA) went into effect. ARPA raised the amount of a farmer’s insurance premium that would be covered by the government, as well as enhanced other options. The goal of these changes was to increase participation in crop insurance, and it worked — today more than 90% of corn and soybean crops are covered by some sort of policy. But, again, there have been unintended consequences, one of them being fewer farmers on the land. On average, the counties studied by the economists lost almost 24% of their farms after 2000.

This is not news to the Land Stewardship Project, which, for the past decade, has been working with allies across the country to return crop insurance to its roots as a way to shield farmers from major weather disasters. In fact, LSP has issued several reports that outline the negative impacts the program is having on small and medium-sized farmers, beginning farmers, and the land itself: 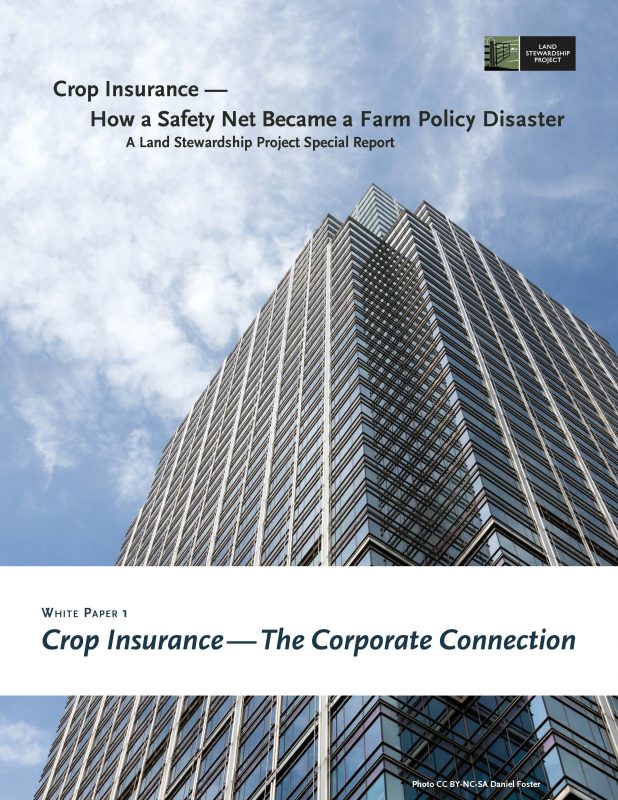 These reports relay long-term concerns voiced by farmers who are seeing firsthand how large cropping operations are using the benefits they receive through subsidized insurance to outbid average-sized farmers on land purchase and rental rates, creating fewer, and bigger operations. This has repercussions all the way to rural Main Streets, which are increasingly being depopulated. This hits beginning farmers and diverse operations particularly hard, since they are more likely to be involved in enterprises that don’t qualify for extensive insurance coverage, such as vegetables or pasture-based livestock.

In addition, because of the guaranteed income these mega-operations can glean from even the most marginal of farmland, corn and soybeans are being raised on acres normally considered too low-producing to bother tilling. That inflates the bushels of crops sent to market, deflating prices. This is particularly ironic given that crop insurance now offers a way for farmers to not only be protected against weather disasters, but from drops in crop prices. This produces counterintuitive situations where even when the weather cooperates and there are bumper harvests of corn and soybeans, farmers receive tax-funded payouts through their insurance. This encourages more production of corn and soybeans, particularly on land that maybe shouldn’t be row-cropped in the first place, which perpetuates the cycle of record harvests and thus higher indemnity payments.

What’s particularly troubling is that those marginal acres — too wet, too dry, too hilly, low fertility, etc. — that now produce guaranteed income for large cropping operations have been in the past the only real estate beginning farmers could afford to rent or buy. On top of that, when a weather disaster triggers big payouts to large cropping operations, they have even more money in their war chest to take control of land, particularly in areas where acres haven’t historically produced high yields. Indeed, the Nebraska study found that crop insurance premium subsidies paid to farmers have the biggest effect on consolidation in counties where production is the riskiest. 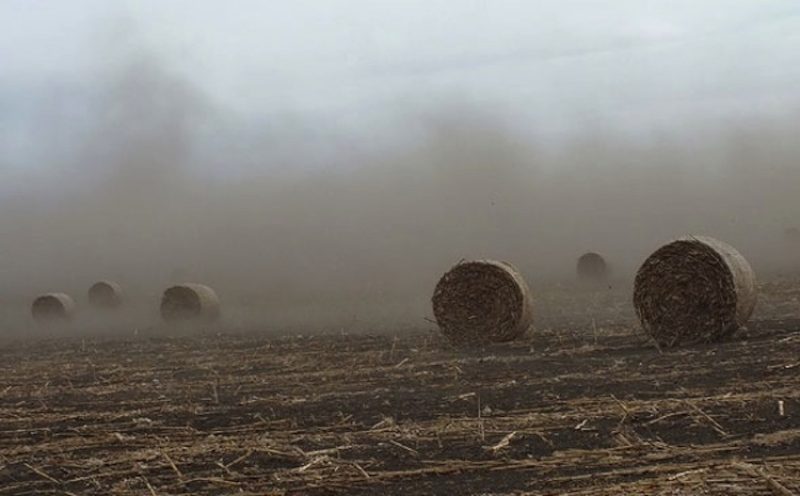 How did a system what was launched in 1938 to keep farmers from being wiped out by catastrophic weather disasters such as the Dust Bowl become such a negative determiner of how the landscape and our rural communities look? Farming is inherently risky, given the vagaries of weather and markets, and that’s part of the reason programs like crop insurance were created. But there’s a difference between cushioning the blow and fueling endeavors that have widespread negative consequences,

The crop insurance program is administered by the USDA as a quasi-private program, with policies sold and serviced through some 14 private insurance companies. For decades, the program was relatively straightforward — if yields were severely cut or wiped out, farmers who bought a policy received an indemnity.

The program underwent a dramatic shift in the 1990s. Following the devastating floods of 1993, Congress sought to increase crop insurance enrollment by ratcheting up how much of the farmer’s premium cost the government would cover (premium subsidies were increased again by ARPA in 2000).

Today, the federal government takes on around 60% of the farmer’s premium cost (depending on the level of coverage), which is almost double what it was in 2000. Even more significantly, it was in the 1990s that “revenue insurance” options were added to the program. For the first time, crop producers were able to assure themselves a target level of income based on projected prices and historic yields. 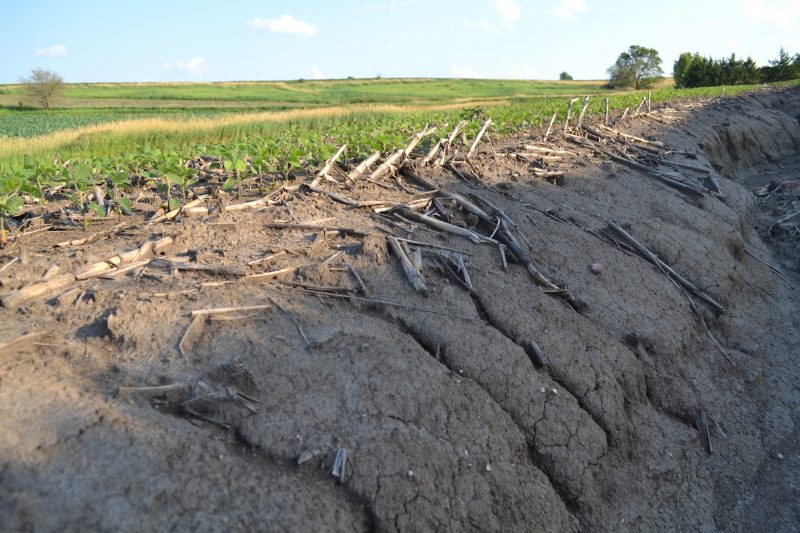 In addition, crop diversification, cover cropping, and other methods that build soil health and thus create more resilient farms in the face of extreme weather have traditionally not been recognized by USDA officials as “good farming practices” and thus are, ironically, considered to be too risky to qualify for government subsidized insurance.

It’s more important than ever to return resilience to farmland, given the havoc climate change is playing on crop acres. One Stanford University study estimated that between 1991 and 2017, $27  billion — or 19% — of the national-level crop insurance losses were caused by global warming.

Farmers received more than $143.5 billion in federal crop insurance payments between 1995 and 2020, according to the Environmental Working Group’s recent analysis of USDA data. That doesn’t even count the $103.5 billion in subsidies that went toward covering farmers’ insurance premiums. Just under two-thirds of those payments were for damage caused by excessive moisture and drought — two problems that will only get worse as climate change creates more extreme weather events. Indemnities for drought were $325.6 million in 1995 and rose to $1.65 billion in 2020, a 400% increase. Insurance payouts for soggy fields were $685.4 million in 1995 and increased to $2.6 billion in 2020, a 300% rise.

Should we dump crop insurance? No. It’s critical to have a safety net that’s true to its roots as a tool for managing risk in a way that benefits the land and communities and doesn’t depopulate the countryside.

LSP has long called for reform of crop insurance. Limiting the payouts mega-operations can receive, recognizing the risk-reducing benefits of soil health practices, and making it easier for organic/regenerative farming operations to get insured are good places to start. As the biggest player in agricultural crop policy, insurance could go a long ways toward encouraging regenerative farming.

Farmers participating in LSP’s Soil Health Network are proving that cover cropping, managed rotational grazing, no-till, and diverse rotations can make agriculture less of a gamble in the long run, and an improved crop insurance system could help producers make the transition into these innovative systems. Fortunately, the USDA’s Risk Management Agency is starting to recognize the climate mitigation benefits of practices like cover cropping and, thanks to the work LSP and others have done in recent years to highlight the benefits of soil health, have adjusted the crop insurance program’s rules to make it more accommodating to practices like cover cropping. In fact, farmers interested in receiving a discount on their insurance premium for planting cover crops may want to check out the Pandemic Cover Crop Program — the deadline is March 15.

Crop insurance falls under the purview of the federal Farm Bill, which is up for renewal in 2023. Discussions around the development of this massive legislation have already begun, and LSP is seeking input from our members and allies on how to make it into the kind of public policy that benefits family farmers, the land, and communities — not corporate Big Ag and its boosters. Check out LSP’s Federal Policy web page for details on how to get involved.

It’s time to make crop insurance a true safety net, rather than a web of destruction.

LSP will hold a Grazing Group Pasture Walk at Oak Creek Pastures in Ossian, Iowa. Sign-in for this free event begins at 4:45 p.m. Supper will be provided; suggested $3-$5 meal contribution.

Scott & Amanda Holthaus of Oak Creek Pastures are hosting a pasture walk for area graziers to show cattle grazing on crop-ground planted last fall to a diverse winter cover mix (rye, vetch, triticale, winter barley) and results of winter bale grazing on permanent pasture. There will be a discussion around fencing and watering considerations for maximizing grazing days.

Join the Land Stewardship Project on Friday, May 20, from noon-1 p.m., for a virtual conversation with other retiring farmers and non-operating landowners to discuss how federal policy could better support your efforts to build a more just and resilient agricultural system. To register, click here.

Get to know other farmers and learn about conservation programs while enjoying a build-your-own taco bar with locally grown foods and ice cream served by the Winona County Dairy Princess. After supper, area farmer and soil conservationist Martin Larsen will share his experiences caving below the farm fields of southeastern Minnesota. Reserve a spot for this free Friends of Whitewater State Park event by e-mailing sara.holger@state.mn.us or calling 507-312-2308.

The Land Stewardship Project will be holding an in-person listening session on regional food systems in Montevideo, Minn. Register here.