When you grow up on a farm in the shadow of the Jolly Green Giant, you can’t help but think that size matters when it comes to success in agriculture. Josh Reinitz’s family’s land sits between Minneapolis and Mankato, just a few miles from where a wooden likeness of the Green One and his apprentice Sprout emerges from the trees, welcoming startled visitors to “The Valley”—the place where for over a century farmers have raised canning crops in rich Minnesota River bottom soil for the Green Giant vegetable label.

In recent decades, the fertile farmland here along U.S. Highway 169 has come to be dominated by large grain farms and hog facilities. So when Reinitz decided to become a farmer, he could be excused for thinking the 40 acres of family farmland remaining in the area wasn’t going to be big enough to be economically viable.

“This area of the state is pretty much dominated by big corn and pork—40 acres, what am I going to do with that?” Josh, 32, asks while sitting next to his wife Sally, 31, in their home. Their two boys, Henry, 5, and Miles, 2, are tracking March mud through the house as an early spring sun begins the spring thaw outside. “Even a few years ago I still wasn’t sure I could make a living farming, because to me it had to be 2,000 acres or a feedlot.” 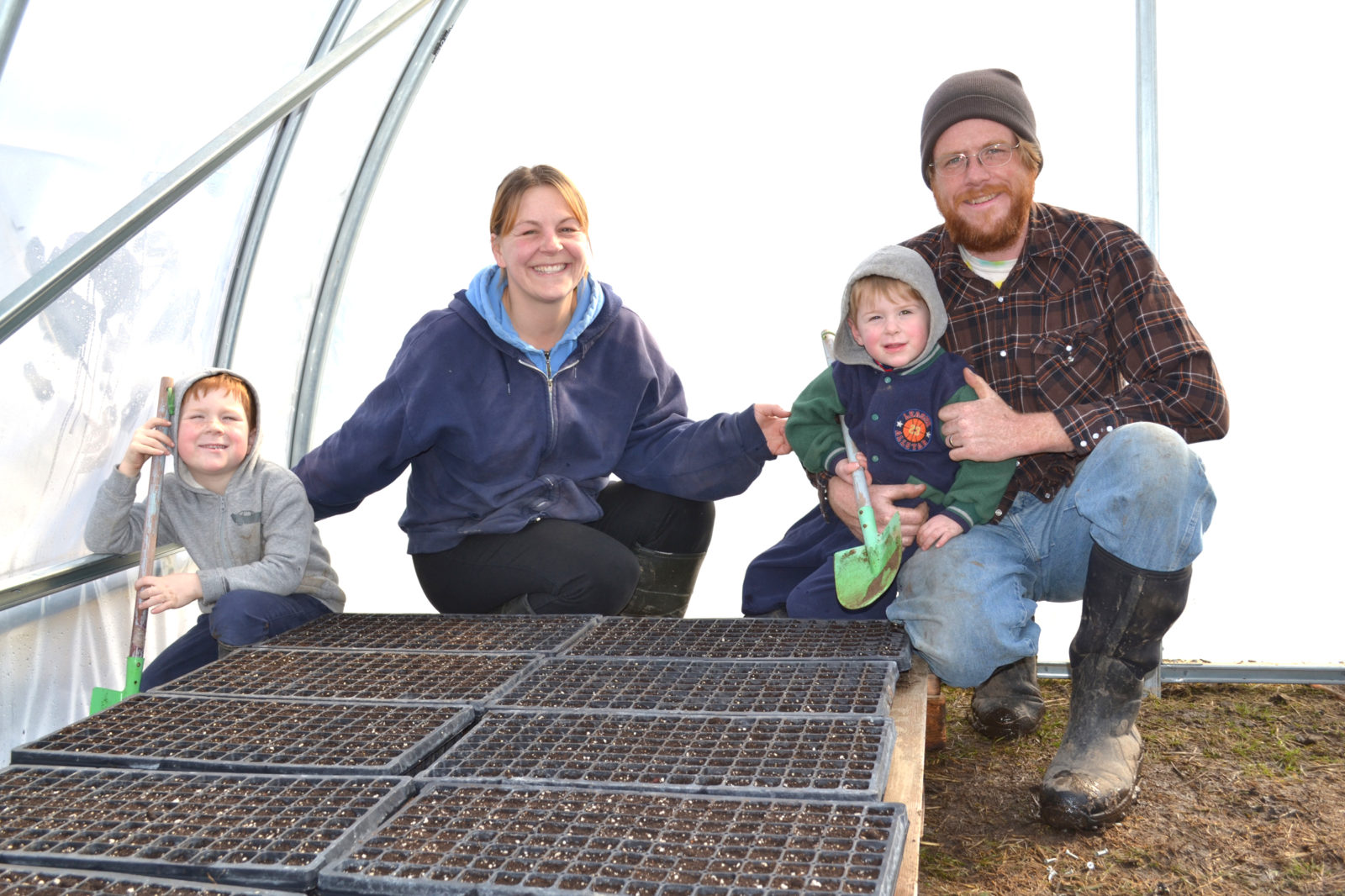 Sally and Josh Reinitz, with their children, Henry and Miles.

Sally grew up in South Minneapolis, and admits to a romanticized view of farming, mostly from time spent as a girl playing on relatives’ farms in the Mankato area.

But Josh had no such illusions: his family got out of farming when he was 10, mostly because his father Paul felt his only choice to stay in business was to expand and that path wasn’t for him. Josh needed convincing the land that has been in his family for four generations near the community of Henderson could still generate a viable income for his family.

Gearing up
But both Sally and Josh like working outside on the land: he has a degree in ecology and she in landscape horticulture. And through connections at LSP and in the community, they became exposed to farms that were making it on just a couple of acres via specialty enterprises such as Community Supported Agriculture (CSA), which consists of selling “shares” in a farm before the growing season begins.

“The gears were beginning to turn,” he recalls.

Those gears got a bit of grease when Josh’s family sold them part of the original operation. In 2006, the couple took an 1860s-era log cabin that had been serving as a hunting shack, and, like some sort of modern homesteaders, transported it log-by-log to their new farm, erecting the cabin on a former hayfield. But Josh knew enough about farming to realize that having land and a place to live wasn’t enough to make a go of it in the long term.

“We were ready to start something, but didn’t know what,” recalls Josh. “I couldn’t take the normal route of being trained into farming.”

So in 2008-2009 they took the Land Stewardship Project’s Farm Beginnings class. That fall and winter the couple drove twice a month to the community of Goodhue for sessions taught by established farmers and other agriculture professionals from the community. For 14 years, the Farm Beginnings program has been training beginning farmers who are interested in innovative management systems. The course emphasizes goal setting, financial planning, business plan creation, alternative marketing and innovative production techniques. The classes are taught by established farmers and other ag professionals representing a range of enterprises: from grass-based livestock production and organic cropping to vegetables and specialty products. Farm Beginnings participants also have the opportunity to attend on-farm events where they see firsthand the use of innovative management techniques.

The first thing Josh and Sally learned was the class wasn’t about how to drive a tractor. “We thought that Farm Beginnings was going to be more of a how-to-farm class and we got half way through it and realized it was more of how to run a business,” recalls Sally.

“I can learn how to operate farm machinery from my father,” says Josh. “But developing a sustainable, viable business model that provides a fulltime living is the key to what makes Farm Beginnings helpful.”

The couple also learned how to take a look at what resources they had on hand, and make the best use of them in launching and running a business.

Josh and Sally have a farm with rich soil in close proximity to two good markets: the Twin Cities and St. Peter. So they lighted on operating a CSA vegetable farm, a model that they felt would allow them to grow into fulltime careers in agriculture without a huge investment in capital up front.

What not to do
Their CSA, East Henderson Farm (www.easthendersonfarm.com), is now in its third season. Sally is only half joking when she says 2010 was the year of “what not to do” farming. They had started out with 16 members in 2009 and more than doubled to 43 last year, creating some growing pains as far as vegetable storage and packing issues.

This year they have 60 members, and feel they’ve dealt with the logistics of post-harvest veggie handling with the addition of more cooling and storage space. Their long-term plans are to have 100-120 members, a size the Reinitzes feel will provide a fulltime income while being sustainable from a workload point of view (Josh has been working part-time off the farm in construction and carpentry).

Scaling up on a CSA farm can be difficult—how does one match the number of vegetable acres with the number of farm subscribers, and vice-versa? But the couple has gotten the hang of “CSA math”—which is a combination of looking at spreadsheets, talking to other CSA farmers in the area, and gauging how many extra vegetables end up in the compost.

They supplement their CSA market by selling to a local food co-op and a restaurant. They also sell eggs produced by their 100 layers, as well as beef from a couple of steers they pasture.

The Reinitzes have used Josh’s background in construction and carpentry to their advantage. Besides the log cabin house, they have reclaimed other buildings and moved them onto the farm. In 2010 they received a grant from the USDA’s Environmental Quality Incentives Program to build a 24×96 hoop house for extending the vegetable season. Since they used salvaged lumber and erected the hoop house themselves, the Reinitzes were able to build the structure for around $5,000, and 90 percent of that cost was covered by the EQIP grant.

The maximum size of East Henderson Farm CSA will eventually be determined by the amount of land the family has to raise vegetables on. Only five acres is tillable—the rest is in either woods or pasture. Most of their vegetable acres were certified organic in 2009, with an additional 1.5 acres in transition until 2012.

But Josh and Sally haven’t forgotten an important lesson gleaned from Farm Beginnings: consider all the resources available on a farm. “I’m looking to the woods,” Josh says, pointing to a mixed stand of maple, red oak, pin oak, burr oak and basswood growing on a hillside that slants down to the Minnesota River a half-a-mile away. “The future of this land is in perennials.”

Indeed, this spring they tapped 40 maple trees and there are plans to establish beehives (Josh’s great-grandfather was a beekeeper) and a fruit orchard.

They also find themselves still referring to the business training they received in Farm Beginnings. Whether applying for the EQIP grant or a Farm Services Agency loan to build a vegetable packing shed, business planning skills have played an integral part in the operation of East Henderson Farm.

“One surprise is how much of a businessman I’ve become,” says Josh. “I’m an accountant. I’m a salesman. I’m a negotiator. I probably put 200 to 300 hours a year on Excel spreadsheets.”

Part of the community
But it’s not all hard-nosed business. Even in the midst of planning expansions and keeping a close eye on finances, the couple is particularly focused on making the farm part of the community. “Henderson is my hometown,” says Josh. “It’s important for me to be engaged.”

They are especially proud that around 20 of their CSA members are within five miles of the farm.

Sally says there are a lot of older farmers in the area that are excellent sources of information on everything from where to buy hay to local soil conditions. Josh’s father also lives just a few hundred yards from them in the farm’s original house, and has been a font of knowledge.

“I think there’s a lot of oral history —an oral tradition that’s been lost. They have so much information to offer about farming,” Sally says.

Perhaps the surest sign that East Henderson is being recognized as part of the farming community is the fact that the request for information is now flowing both ways.

“When you first get started and say you’re going to have an organic vegetable CSA, people say, ‘What’s that?’ ” Josh says as he heads to the woods to collect sap and Sally prepares to load eggs into the car for a town delivery. “Now three years into it corn and soybean farmers are asking us about crop rotations. We’ve kind of proven ourselves to the skeptics here that this is a viable farm. It might only be 40 acres, but if we’re making a living, isn’t that a farm?”

In LSP Ear to the Ground episode 97, Josh and Sally Reinitz talk about working to prove their CSA is a viable business in the community.