I recently witnessed the return of life to Jordan and Rachelle Meyers’ fields, which are transitioning from giant ragweed and thistles into soil-building plants such as chicory, red clover, and wild bergamot. During the past few years, the family, which farms in southeastern Minnesota’s Houston County, has used hard work and attention to the soil to turn a massive problem into soil fertility and economic value. I saw firsthand how they are doing that during a Land Stewardship Project Soil Builders pasture walk.

While they shared their farm’s investment in soil health, other LSP members, neighbors, and family members shared their own experience with cover cropping, integrating livestock on the land, and other soil building practices. The key tool these beginning farmers are using to turn weed pests into profit is “adaptive managed grazing,” which is a form of grazing that involves moving livestock every day to build back soil fertility. Judging by the turnout and number of questions asked, plenty of other people of various ages and backgrounds are also interested in how to rejuvenate less-than-optimal land. At one point, Jordan summarized the day’s success: “Jeepers cats it’s already 2 o’clock!” 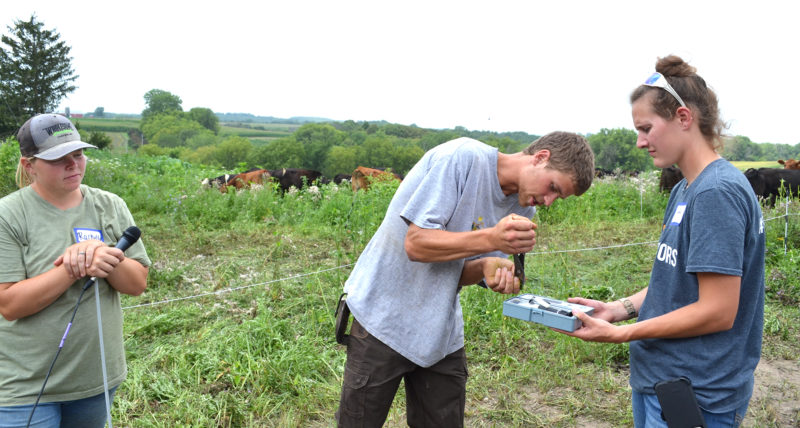 The field day was located near Caledonia on a farm that’s made up of what’s considered mostly marginal land. This means that the soil, landscape, and other factors make traditional farming methods like row cropping a difficult task due to erosion and weeds. Purchasing or renting marginal land can be a good bet for beginning farmers like the Meyers who are looking to build back soil fertility in a profitable manner on affordable acres. They rent this particular farm, and after trying to row crop it for five years, they grew tired of fighting nature.

“What they [the ragweed and thistles] were telling us was our soils were really in a bacterial state…,” said Jordan. A bacterial state, such as the case in a weedy field, occurs when too much nitrogen is being cycled into the ground. “To change that we needed to start adding more carbon to our soils,” he added.

Instead of mowing the weeds and attempting to establish beneficial species through tillage and seeding, the Meyers added value to the pests in the form of forage and ground cover. Using high-density strip grazing, or “flash grazing,” with electric fencing, the stockers — cattle bought from and sold back to the sale barn — graze or trample down the invasive weeds, breaking up their growth cycles, protecting soil moisture, and reducing inputs.

“The only equipment that we own is our fencing, and the only things we give these guys are grass, weeds, and water,” Jordan explained.

Utilizing a bale-grazing system where they painstakingly muscle hay bales to areas with little growth to encourage cattle to congregate on them, Jordan and Rachelle ensure that hoof activity coupled with the urine and manure of the cattle regenerates the soil. They also analyze the cowpies to determine, based on their consistency, if their cattle are getting enough protein. The young farmers say the number one tool for producing grass-fed beef is the refractometer, which measures the sugar content of plants. Using this, they have learned to determine how much to feed their cattle and that their forages have the most energy in the afternoon when they’ve absorbed the morning’s moisture. They’ve been pleasantly surprised at the relatively high sugar content of the weeds they graze.

During the field day, we continued to learn about these exciting and innovate practices as we explored the habitat of their goats, the second of the four animals Wholesome Family Farms produces for direct-sale to consumers. Jordan described how the goats feed on invasive species like buckthorn and multiflora rose along almost impenetrable hillsides in the woods, preserving the fungal soil under maple and oak canopies. As an avid hiker, I was pleased to see bergamot and black-eyed Susans next to emerging saplings. The goats, which are sold as antibiotic-free, 100% grass-fed meat along with the rest of their products, are rotated through 300 acres of forest on this particular rented farm (it also includes 200 acres of open pasture).

Balancing the direct-to-consumer livestock enterprise with raising a family and planning for the future centers around the health of the soil, the animals, and their customers. With five young children, nutritious, ethically raised food is a driving force for the Meyers’ various enterprises.

“I decided it was too difficult to find food I actually wanted to feed my family, so we started growing our own,” Rachelle recalled.

With support from the owner of this particular farm (they also rent and own other parcels in the area), the Meyers can experiment with building the kind of healthy soil that adds value back to the land. And that has bigger implications. For example, one of the pests they are using to transition their soil profitably is giant ragweed, a major problem for farmers throughout the Midwest because of its ability to take over crop fields and resist being killed by herbicides. By trampling and grazing the ragweed, these beginning farmers are not just benefiting the local soil, but the larger agricultural community.

As this field day made clear to me, on a farm like this one, it all connects: healthy soil, healthy food, healthy communities

Sam Streukens is an LSP member-leader who lives in Winona, Minn. He is on contract to organize with LSP’s Soil Health Team this summer. Check out this recent LSP video where Rachelle and Jordan Meyer describe their “cell” grazing system. On episode 255 of LSP’s Ear to the Ground podcast, Jordan describes how they are “embracing the weed” and using livestock to convert their soil from a bacterial to a fungal state.