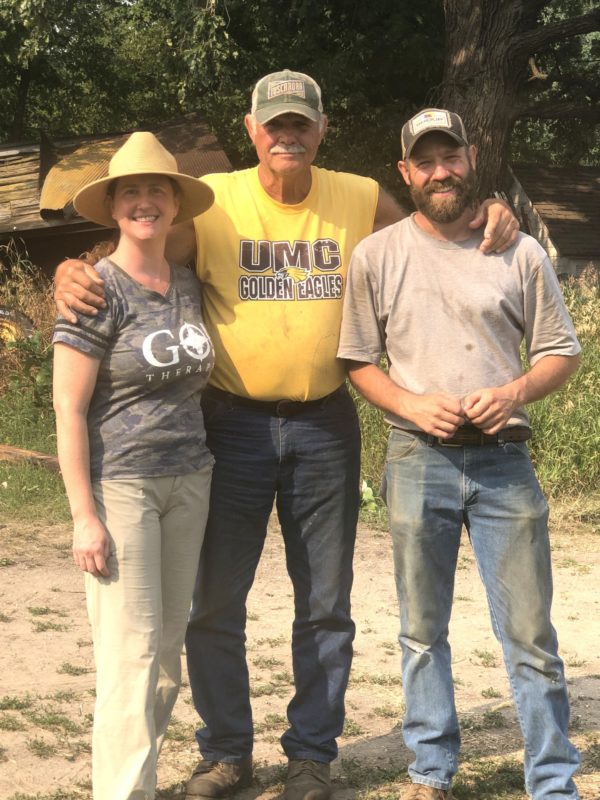 I became a member-leader of the Land Stewardship Project to help achieve justice for the people and the land. By identifying our self-interest, listening to our neighbors, and acting on our values, I also believe that we can become a welcoming community. Doug Nopar,who worked for many years as a rural LSP organizer, believes that communities are stronger when people with separate backgrounds but common values come together. “When farmers and others who share similar interests engage in conversation, real change begins to happen,” he says.

Throughout its history, LSP has connected farmers to sustainable farming methods, grown the support of non-farmers, and stood with community members opposing injustices such as factory farms. The unified voice of LSP’s members holds those in power accountable to our values — stewardship, justice, democracy, health, and community — which are outlined in LSP’s five-year plan. Putting our mission — fostering an ethic of stewardship for farmland, promoting sustainable agriculture, and developing sustainable communities — into practice is accomplished through the voices of our members.

In recent years, an issue that keeps rising up is racial justice and what it means for our rural communities and agriculture. LSP has long understood the importance of standing up to unjust systems; after all, it stood shoulder-to-shoulder with family farmers during the 1980s farm crisis. I am sharing this blog because I believe that LSP’s history of fighting for rural communities can help support future generations. Moreover, when we have conversations with each other, we build welcoming and thriving communities.

I recently spent time with a few LSP members talking to them about their role (and the role of LSP) in fighting racism in the food and farming system and supporting Black, Indigenous, and people of color (BIPOC) folks within our rural communities.

Mike and Dana Seifert’s operation, Ravenview Farm, is in Jordan, Minn., 35 miles southwest of Minneapolis, where calls for racial justice were magnified after George Floyd’s murder in May 2020. The farm has been in Mike’s family for approximately seven generations, and before that it was stewarded by the Wahpekute Tribe. The owner and fellow operator, “Big Mike,” who is Mike Seifert’s father, started farming in 1975 and toughed it out during the 1980s farm crisis. “The prices were awful, you could not make a living, you could not make a profit,” recalls the older farmer.

Big Mike recognizes the economic and ecological benefits of building soil health by transitioning the farm back to small grains and cover crops. As a result, Dana and Mike, who started farming in 2015, have been helping put in place such soil-building practices as no-till, diverse rotations, and cover crops. “These are two pretty sharp cookies,” says Big Mike proudly.

The Seiferts live in a tight-knit community surrounded by family. They are keenly aware of how George Floyd’s murder raised tensions between law enforcement and many community members, particularly in Minneapolis. “The perception of the police force in a town like Jordan is totally different,” says Mike. “They’re members of the community; they’re involved.”

The couple use their curiosity and deeply held values of family, hard work, and respect for the land to understand that the disconnect/division between groups of people develops from systemic discrimination. Dana believes that we can build a strong community by listening, asking questions, and fighting alongside our neighbors. “If we acknowledge that there’s wrong, we can use that to motivate change, then I think there’s real potential and real hope for improvement,” she says.

The systemic injustices that LSP members faced during the farm crisis relates to the experience of BIPOC folks. For example, many urban, suburban, and town residents grew up in segregated communities because of restrictive covenants between municipal governments and banks that denied Black folks access to certain housing markets. Additionally, many banks engaged in “redlining,” where they would deny loans to Black families in certain communities regardless of income. At the same time, Black farmers faced discrimination in purchasing farmland and were systematically denied operating loans by the USDA. All of these discriminatory practices prohibit investment and the creation of generational wealth. As was clear when LSP farmers struggled with the shutdown of meatpacking plants, both farmers and meatpacking workers, many of whom were people of color, were being harmed (and still are) by the same dysfunctional system that treats people as commodities to be used.

We have a duty to heal the divisions created long before we came onto the scene. We can do this by identifying our self-interest and learning from our neighbors. “You can hopefully get past the guilt and acknowledge that it’s not my fault, but it’s my responsibility,” explains Dana. Mike, who works as a carpenter with his dad, describes what drew him into the conversation: “You see a lot of interconnections when you work on the farm. You realize that the world is not just your little bubble, because everything is connected to everything.”

Additionally, according to Dana and Mike, when we highlight the voices of those that are exploited within our communities with whom we have a connection, we are drawn to action due to humans’ natural tendency towards empathy.

As LSP has done for almost 40 years, by highlighting the stories of farmers and other rural residents, members, supporters, and staff listen and stand alongside those suffering from an unjust food and farming system.

“Communities that have been dealing with this level of system oppression know what they need,” says Dana. Once we identify those that are discriminated against and identify the connection to our interests, we strengthen our voices, which are rooted in our values by taking action.

“You can listen to the story and pass that on to the audience that you have and say, ‘This is something that directly affects us, whether we know it or not,’ says Mike.

To build solidarity with other rural LSP members who were engaged in conversations around social justice issues, Dana and Mike attended LSP trainings on economics and race. They say they appreciated the opportunities to get involved. “The onus cannot be on the oppressed people to dismantle the system that oppressed them,” says Dana. “We’re in a position where I’ve got the bandwidth, I’ve got it mentally, emotionally, financially to spend some time thinking and talking and maybe doing other things as I learn about what those other things may be.”

These opportunities will become more available and accessible through member engagement (see the sidebar for information on upcoming LSP trainings).

Dana and Mike make it clear that we must listen with empathy and curiosity. Our voices are stronger when we build a community where everyone belongs. Again, building healthy soil and a welcoming community are one and the same.

As Big Mike says, “Sustainable farming goes down to the root of it all. If we don’t preserve what we have, nothing else that we discuss here will make any difference.”

Sam Streukens is an LSP member-leader who lives in Winona, Minn. He is on contract to organize with LSP’s Soil Health Team this summer.

This is the second year of a two-year research project through the Minnesota Department of Agriculture looking into creating on-farm compost recipes using the Johnson-Su Bioreactor design. Land Stewardship Project staff are working with five farms to build a total of 10 bioreactors in the month of June. We are looking for 3 to 5 member-volunteers for the days of June 7, 9, 15, 17, and 29. Details are here.

E-mail Shona Snater at ssnater@landstewardshipproject.org for more information and to sign-up as a volunteer.