Owl Bluff Farm is tucked away in one of those Driftless Area coulees where cellular signals go to die. In fact, when contractors were constructing a building there recently, they sometimes climbed half-way up an abandoned silo on the farm to use their phones. It has a sense of being an isolated, if beautiful, little spot in southeastern Minnesota’s Houston County.

But on a recent summer day, Carrie Calvo took a break from weeding her vegetable plots to quickly tabulate just how connected the 20-acre farm actually is to the region.

From April to November, she delivers to two area grocery stores that are within 20-minutes of the farm. Owl Bluff also sells to a community food hub, two cafes, and a farmers’ market, all within a half-hour of the farm. The furthest Calvo has to drive to her customers is an hour to Rochester, Minn., where she delivers vegetables and a neighboring farm’s chickens as part of a home delivery enterprise.

And Calvo has been able to connect with half-a-dozen other beginning farmers in the area who are undertaking innovative enterprises like grass-based livestock production and silvopasturing. Not too bad for a farm that was bought sight unseen while Calvo was sitting in front of a computer 7,000- miles away.

“I’m surprised at how able we were to find customers and to have a loyal customer base so close,” she says as she provides a tour of the half-acre of vegetables she raises with the help of her husband, Charles, and mother, Kathy Burch. Carrie, who’s 37, adds with a laugh, “And then when I moved here, I met a whole bunch of other crazy young farmers.” 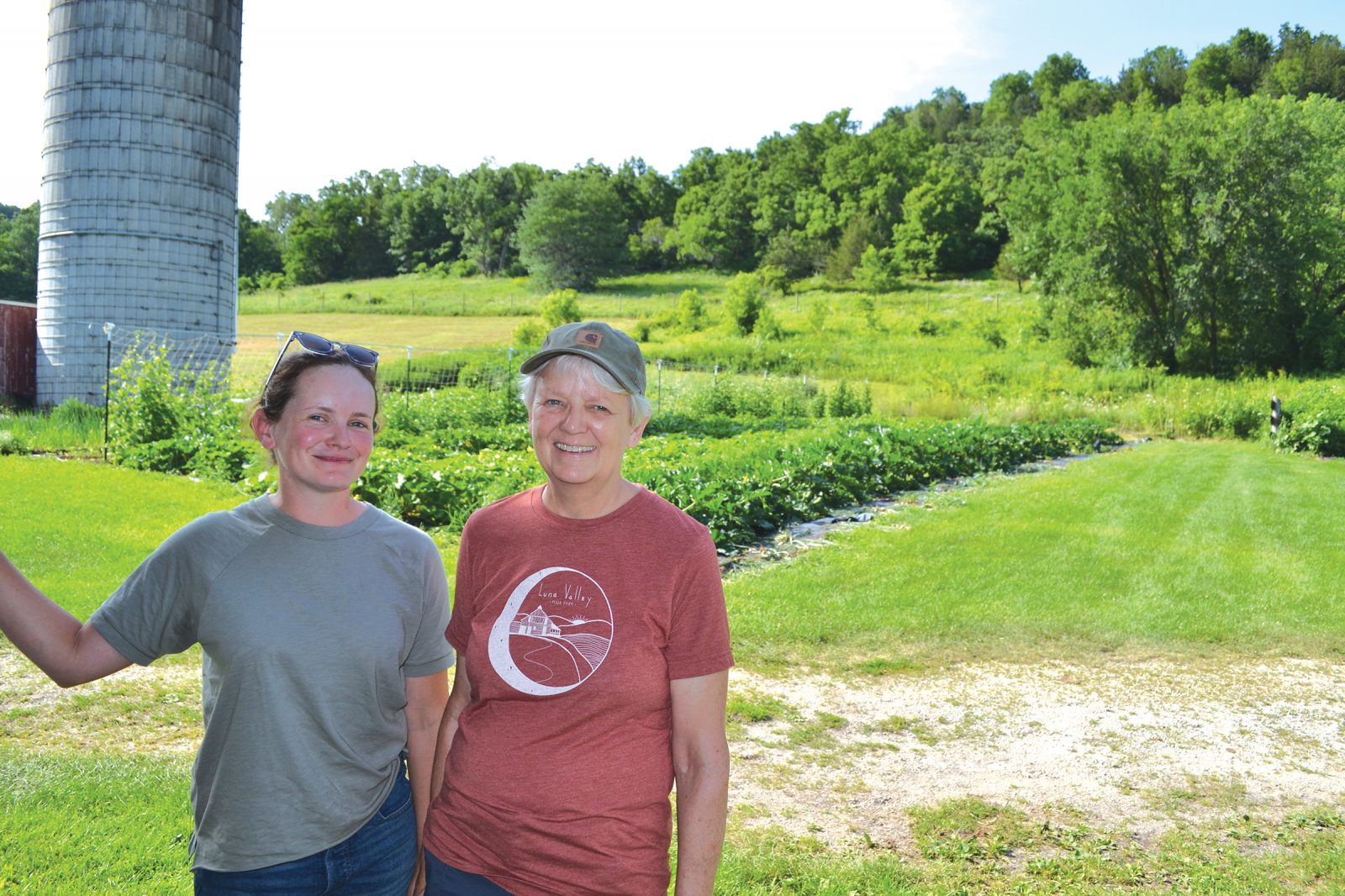 Carrie Calvo and her mother, Kathy Burch, take a break from weeding and harvesting on Owl Bluff Farm.

She concedes making the move into farming after spending 10 years working for the U.S. government — five of it in the desert metropolis of Dubai — seemed a little less crazy after she completed the Land Stewardship Project’s Farm Beginnings course in 2019. Through classes led by established farmers, trainings in business planning and innovative marketing, and perhaps most important, conversations with other wannabe farmers, Carrie saw the potential to take a holistic approach that linked the land, people, and community.

“Farm Beginnings really helped me think through the whole plan,” she says.

Web Surfing in the Desert

Carrie grew up in Rochester and has an undergraduate degree in Middle East studies and a master’s in Persian languages. So it was no surprise that her career path led her to Dubai. Although she didn’t come from a farming background, she’d always been attracted to working outdoors and raising healthy food. Charles, who she met in Dubai, grew up in Massachusetts, and also has no farming background. Thank goodness for the Internet.

“I think the last year or two we were in Dubai we spent every evening and weekends watching farming YouTube videos,” Carrie recalls. She also listened to old episodes of Farmer-to-Farmer — a popular podcast produced by the late Chris Blanchard, a veteran vegetable producer — and read books by vegetable production gurus such as Eliot Coleman and Jean-Martin Fortier. Carrie completed an online market gardener master class while the couple kept an eye on real estate listings in southeastern Minnesota.

Finally, through Craigslist, the Calvos found a farm that seemed to fit the bill: it had a house and some outbuildings, as well as tillable land, including a south facing slope, something Coleman insists is necessary for a successful vegetable operation. The tillable parts of the farm were also mostly hay ground, making it easier to get the land certified organic.

Burch checked out the farm and reported back that, “It’s a little rough, but it’s really pretty down here.” Carrie and Charles wrote an “impassioned” letter to the owners about their plans to launch a farming enterprise on the property. The owners, who were in their 80s, had raised feeder calves and hay on the property, and wanted it to stay in farming. The younger couple made it clear in their letter that they wanted to farm the land, restore the house, and live in it year-round.

“I think they just were excited that someone seemed to appreciate the property and were going to actually put down roots there and not have it be just a weekend hunting property kind of place,” says Carrie.

Given that they were half-a-world away and lenders in the community didn’t know them, financing was tricky. But Carrie and Charles were eventually able to get a business loan and then later refinance and turn the loan into a regular residential mortgage. They moved onto the farm in 2018 and planted a small plot of vegetables for themselves, neighbors, and family.

That first year went well, but Carrie knew having one season of growing a big garden wasn’t enough; financial management and business planning are weak spots for her, and she knew little about how to build consistent, local markets. Local livestock producer Dayna Burtness recommended she take LSP’s Farm Beginnings course. For over two decades, Farm Beginnings has offered training for beginning farmers in holistic business planning, innovative marketing, and goalsetting. It’s taught by established farmers and other agriculture professionals from the community, and provides an opportunity for participants to be mentored by producers who are undertaking the kinds of enterprises the students would like to pursue.

Carrie says the course helped her develop a budget and marketing plan and, just as importantly, taught her how to do the kind of goalsetting that balances work and quality-of-life issues. She remembers one assignment in particular where class members had to come up with the top three enterprises they were interested in, the costs, and what they’d expect to earn back in a certain number of years.

“It really helped me to focus on every little cost that was going into starting the operation and expanding the operation, and estimating what the return would be and in what sort of time frame we would be able to make back costs,” says the farmer.

That and other exercises helped Carrie narrow down her farming plans and focus on vegetables. And through the class, she was able to connect with Hallie Anderson, who runs 10th Street Market Farm in Afton, Minn. Anderson’s operation is similar to what Carrie aspired to: vegetable production that serves various local markets. She visited 10th Street and got advice on, for example, how to set up a high tunnel system.

Since completing the class, Carrie has taken on more markets and expanded production. Half-an-acre of the farm is growing vegetables, but there’s room on the certified organic operation for more.

“I think we could produce probably twice as much and still be able to sell most of it,” she says. “The grocery stores were so excited to have local, organic options.”

They’ve used USDA Environmental Quality Incentives Program funding to set up a high tunnel system — they now have three unheated tunnels, and would like to add a heated greenhouse to help with propagation. Right now, they’re starting everything in an old freezer that’s been hacked to make it a germination chamber; plants are eventually moved to the dining room, making for a crowded house in the early spring.

They have installed a walk-in cooler and Burch, a retired physics teacher who is handy with tools, set up a vegetable washing station in an old machine shed. Owl Bluff recently finished a combination carriage house and pack-shed that can be used during the colder part of the season. They’ve also erected a high fence around the vegetable plots to keep out the deer. The farm has stepped into the value-added world by producing dehydrated and canned products, including paprika smoked by a local barbecue joint, Fat Pat’s.

Four years in, the family is at a point where they need to make decisions about expanding and what changes in infrastructure that might require. Carrie says having several different markets during the week allows them to split up the harvesting schedule and pretty much sell everything grown. But efficient transportation can be an issue.

“We’re still driving this truck to the farmers’ market with all of our stuff mounded in the back,” she says, pointing at a pickup parked near the pack-shed.

Although there’s plenty of demand in the area for more vegetables and Owl Bluff has additional land that could be farmed, for now, there are no major plans to expand, says Carrie. Two neighboring farmers help out on delivery days. Along with Charles and Kathy, that’s the extent of the labor force. (Charles works off the farm and helps out in the evenings and on weekends.) Carrie says they’d like to stay at this size, given labor issues and the time commitment of servicing more customers. Expanding significantly would likely mean servicing more wholesale accounts, more time on the road, and less time with each customer — something the farmer says she wouldn’t enjoy.

“It is exhausting, but also really satisfying at the size we’re at,” she says, adding with a laugh, “And it’s just barely out of control.”

This article was originally published in the No. 2, 2022, Land Stewardship Letter.

On episode 293 of the Land Stewardship Project’s Ear to the Ground podcast, Carrie Calvo talks about the surprising availability of various marketing options in her local community and the benefits of networking with other beginning farmers.

Farm Dreams: is Farming in Your Future?

Farm Dreams is designed to help people clarify what motivates them to farm, get their vision on paper, inventory their strengths and training needs, and get perspective from an experienced farmer. To get started, click here and download the Farm Dreams visioning exercise in pdf format.